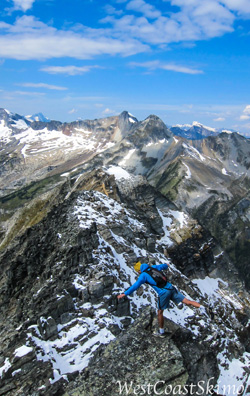 Since 2009 Canadian National Ski Mountaineering Team have been meeting every September for our summer training camp.
Previous camps were usually hosted in Canmore, AB by Steve Sellers but this year we thought it’s time for a change and organized it in Revelstoke, BC.
The team was pretty much complete with one exception – everyone’s favorite and North America’s fastest, Reiner Thoni, couldn’t make it as his old truck started to come apart a day before his departure.

The idea behind this camp wasn’t about training hard. It was about getting together and have good times.
We are also trying to blend in some younger blood into the team before people find themselves sharing a room at World Championships in February, 2013.
Attending: Melanie Bernier, Martha Burley, Steve Sellers, Stano Faban, Brad Schalles, Peter Knight, Adnrew McNab, Ian Gale, Jeff Colvin, Julie Matteau.

Summary of day one and all photos are from Brad Schalles (WestCoast Skimo – http://westcoastskimo.blogspot.ca/), one of new additions to the Team. Watch out for Brad this year, he will be the NA dark horse this year.
On Saturday the group split up, with five of us heading up to Rogers Pass for a run and scramble up 1300m to summit Mt Cheops. After meeting up with Steve, who had spent a cold night at the pass, we headed up the trail in the crisp morning air.
The run up to Balu Pass was fast and we all felt light on our feet on the superbly maintained trail. We made it to Balu in an hour and thirty minutes – we all remarked on how much faster it was to run up the valley rather than ski.


After a quick snack on top of the biggest rock we could find, we scrambled along the ridge to the top of Mt Cheops. At the summit we pulled a few bouldering moves to ensure that we were on the tippy top of Mt Cheops. We had a snack and took a group photo in our team Rab jackets, and then we set off down the ridge towards our next stop: an ice cold dip in Connaught Creek (which just might be the coldest creek in Canada).
We made a light-speed trip back to Revelstoke (thanks to Slovakian over-drive), and we regrouped at a fine local establishment with Andrew and Peter. They had spent the day at the Martha Creek Melt Down where Peter placed 1st and Andrew 4th. After a great night caching up and talking all things skimo, we headed home to rest up for the next big day of the camp.

Watching the summer London Olympics left me with lots of inspiration and so on Sunday morning we all met at Revelstoke high school stadium. The leader for this session was Jeff Colvin – one of the fastest Canadian skimo racers few years back – who is a track & field coach at the school.
Under Jeff’s leadership we all completed the following “skimo pentathlon”:

Everyone had loads of fun as none of us knew what to expect from each discipline. On top of that, by the time our heads somewhat grasped one skill it was time to move to something else – testing our adaptiveness in the process.
Women’s pentathlon was won by Melanie Bernier and men’s main prize went to Brad Schalles who blew everyone in the 800m run on top of winning the 100 dash.
» Revealing video coming soon 🙂
Afternoon
After a season planing meeting during the lunch we split into road and mountain biking groups.
In fact, it was only me and Brad riding the road. We had a good 3h ride in the sunset lit valley north of Revelstoke, riding the always twisting road on the shores of 130km long Lake Revelstoke.
The mountain bike group rode the shadowy side of the valley, however, great Revelstoke trails kept them warm too.

Team’s next camp is in the works. It will likely be already on skis somewhere high in the beautiful Canadian mountains.

This is article was submitted by Melanie Bernier – an elite skimo racer and a member of the Canadian National Ski Mountaineering Team. Read her previous article here – Grand Teton: adventures are essential for skimo training…
Last weekend (Jan 28-29, 2012) saw the biggest event of this winter on the North American skimo racing calendar. Six of us, part of the Canadian National Team, traveled to Crested Butte to compete in the first ever official North American Championships.
We arrived few days earlier to have a chance to get somewhat used to CB’s high elevation (CB is at 2,715 m) and explore the race routes. The “No Climbing Uphill Policy” at the ski hill got in the way of our course scoping but we were blessed with beautiful sunny days so we were able to at least have a great visual of the individual’s race course.

On Saturday morning, we woke up to a very brisk -30 C for the sprint race. The venue was mid-mountain near a beautiful restaurant where racers gathered to keep warm until the start.
The course started on a flat groomed sections changing quickly to switch-backs in the trees then flatter terrain before gaining the first transition to the first descent. Through gates, over moguls, racers had to zigzag back down for a second transition. Then to a short boot-pack and skin again to reach the final descent.
The women were the first out of the gate going at 30 seconds intervals. Sari Anderson was the first one to go, I was second, Janelle Smiley just after…
My race went very well as I closed the gap on Sari at the top of the second climb and completed the course in 5:39 which was enough to win the race.
Top 3, top North American and all Canadian women:
1. Mel Bernier (CAN)
2. Janelle Smile (USA)
3. Sari Anderson (USA)
6. Julie Matteau (CAN)
Our Canadian men did very well too! With a strong Italian presence, the Canuck boys rose to the challenge. Manfred Reichegger (Italy’s top racer) topped the podium as expected. Behind him, our unique “Reinerian” earned second ahead of Lorenzo Holzknecht (Italy) who was followed closely by our Andrew McNab. It was very impressive to see them all run and give all they had.
Top 3, top North Americans and all Canadian men:
1. Manfred Reichegger (ITA)
2. Reiner Thoni (CAN)
3. Lorenzo Holzknecht (ITA)
4. Andrew McNab (CAN)
5. Jan Koles (USA)
6. Travis Scheefer (USA)
12. Ian Gale (CAN)
27. Steve Sellers (CAN)
» Sprint race full results

The following day, in friendlier temperatures, we gathered at the base of the mountain for the individual race. The course was not so impressive for its vertical but for its challenging route.
We climbed a groomed run for a thousand feet before getting into what seemed like 100 switch-backs with a single skin track. From there, it was skis and poles on the pack, jacket on, and via-ferrata and ascender on the rope – we climbed the “Guides Ridge” to the summit of Crested Butte at just over 12 000 feet.
From there, we ran down the other side of the peak, then skis on, we descended to the bottom of Paradise Bowl, from there we climbed 1000 through the trees and on the rocky ridge back to the top transition. We had to complete this same lower loop twice before going down a single track in trees, steep icy moguls to crazy fast groomer to moguls again and high speed rollers to finish with an excruciating skate ski.
My race – I guess my strategy was not quite right for this race. I was holding back at the start a bit too much and got stuck behind at the switch-backs. Then by the time I got to the ridge there was a big bottle neck.
Here the race got stopped twice because of rock falling and miss communication between the race marshals which resulted in an hour spent on the ridge getting cold and waiting to move forward at a turtle pace.
Fortunately, the view was pretty nice and people around me were friendly so it was quite pleasant and relaxing… but not much of a race at that point.
When finally at the summit, I literary sprinted down the bootpack and skied like mad to try to catch up. At the first lap up paradise bowl I left the transition way too fast and forgot that this was not a great idea while racing at such altitude – I burned myself solid for the second lap and I was barely hanging facing the “Bunk Wall”.
Finally at the top of the last climb, I knew I could gain some time and positions with a fast descent. Reaching the final section I completed the skate with below zero juice in the tank. It was a great learning experience as I have never (or not in a long time) reached such low energy levels while racing.
For few other Canadians the race went rather smoothly. Reiner Thoni and Andrew McNab escaped the bottle neck and had a fantastic race while the rest of us were still on the ridge those two were batteling for 3rd and 8th place respectively.
A big congratulation to our Continental Champs Reiner Thoni and Janelle Smiley.
Top 3, top North Americans and all Canadian women:
1. Janelle Smiley (USA)
2. Sari Andreson (USA)
3. Stevie Kremer (USA)
5. Melanie Bernier (CAN)
7. Julie Matteau (CAN)
Top 3, top North Americans and all Canadian men:
1. Manfred Reichegger (ITA)
2. Lorenzo Holzknecht (ITA)
3. Reiner Thoni (CAN)
4. Luke Nelson (USA)
5. Jason Dorais (USA)
8. Andrew McNab (CAN)
18. Ian Gale (CAN)
28. Steve Sellers (CAN)
» Individual race full results