This is a second article submitted by Melanie Bernier – an elite skimo racer and a pillar member of the Canadian National Ski Mountaineering Team. Read her first article here – skimo racing experiences from Jackson Hole and Grand Targhee.
At 3am on January 14 two alarms went off in our host attic. After 8 nights of sleeping in our small camper we finally gave in to a short but restful night in a real bed, the reason being a grand ski plan for the day.
With a high-pressure system hitting the Tetons, our nice local tour guides and friends decided that it would be a good idea to climb the Grand Teton – one of the most dramatic mountains in the South Rockies.


Still sleeping, we literally jumped in our prepared clothes, swallowed our pre-cooked breakfast and jumped in Nathan’s big diesel truck. On the way we pick upped Zahan and headed to Teton National Park.
Armed with our headlamp, heavy backpacks but light race gear, we were skinning the sleeping forest just before 5am. We were making good time traversing the flats and zigzagging in the trees to gain the meadows. 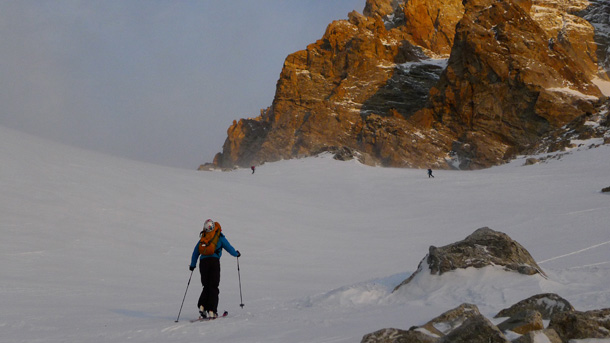 At the break of dawn, we were standing just below the headwall looking up at both the Grand and the Middle Teton. The breathtaking dramatic scenery and multiple ski couloirs were highlighted by the ever so stunning sunrise.
As we gained a plateau, below the Lower Saddle, the winds started to pick up. They were only breezes compared to what was waiting for us higher up. 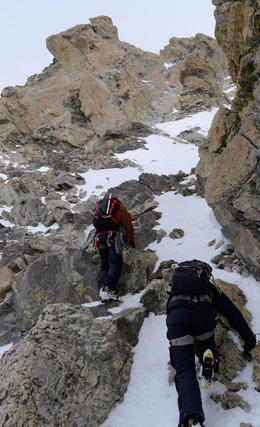 As we reached the col where climbing gear was waiting for us we found out that crampons were missing and so we had to do with what we had.
By that point, we were barely able to stand due to ever so increasing winds. We took a little break to plan and to put on all warm layers we had to keep warm.
We started our trek (without skis) along the ridge leading to Owen Spalding route. We had to use all of our strength to stay up right fighting consistent 75-100 miles/hour winds.
Then a simple walk on rocky ridge changed to scrambling and boot packing on supportive wind packed snow.
We gave ourselves a time limit to reach the Upper Saddle because we knew it would be very difficult to get any higher safely because of the winds.
At this point, both Nathan and Zahan, having climbed “The Grand” multiple times, admitted that they have never seen winds to this magnitude up there.
We finally turned back at the Balcony at around 13000 feet, just below the Upper Saddle. From there, we climbed down and fought the winds all the way to the Lower Saddle where we retrieved our skis. Thankfully, we anchored them good enough to find them there. 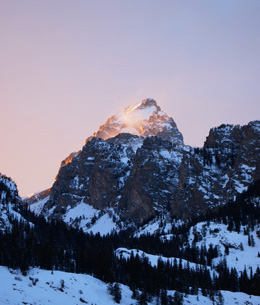 We skied down in very strong wind gusts but beautiful sunset. Back to the flats, we crossed the frozen lake and looked back at the only peak standing in the lowering sunlight: The Grand.
We may have not made it to the top that day but we sure discovered an area where we would like to return to. Some other day we will stand on the summit… today wasn’t it. In this case it was the journey that made the day incredibly special.
A big Thanks goes to Nathan and Zahan for such a great day!
This was one of the highlights of two weeks of exploring Jackson and its surrounding areas. Now back on the road, time for some Ski Mountaineering Racing in Colorado! 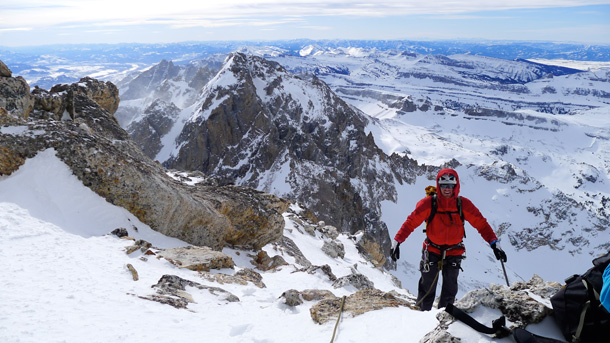