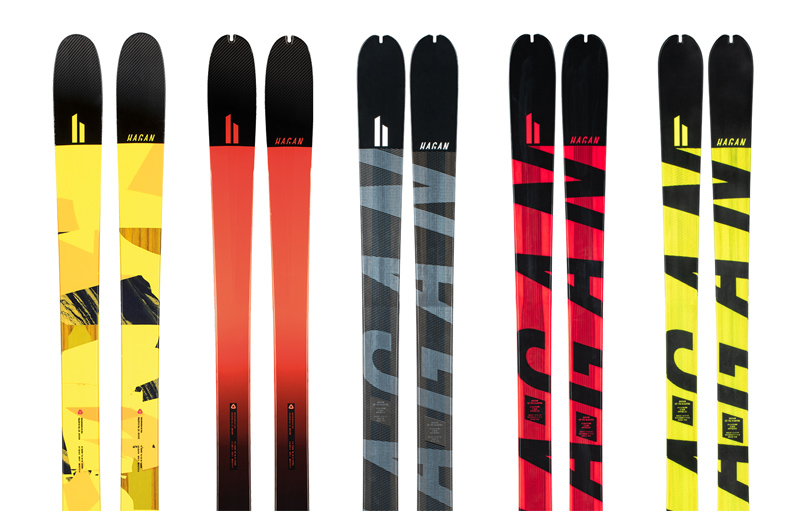 Just like SkiTrab’s new ski offerings for 2020/21 season, Hagan has a couple of exciting new models coming out for this winter as well, especially for those of us that love ski mountaineering and ski touring above all.

Hagan goes back almost 100 years and it had been one of the first to manufacture specialized touring skis but then “took a break” from leading the way. However, over the last 10 years the company has been making a strong comeback with skis that deliver an excellent ski mountaineering and touring experience.

Hagan calls its freeride line “Boost” and the ski we want to point you to here is Boost 99, with a 410mm rocker in the front and 200mm at the back.

As the name suggests, the ski is 99mm under foot yet floats and keeps stable at higher speeds equally as well as a slightly wider ski. We have skied it twice so far and liked how it predictably flexed and behaved overall.

Introduced only a few years ago, the “Ultra” line is where Hagan shines. We have skied the Ultra 82 model the last two winters and really like them – read our review here.

The Ultra line is aimed at advanced skiers that often get after technical descents. Weight is kept on the lighter side yet the skis still feature a wood core which helps a lot to smooth out the ride for otherwise fairly stiff skis.

Based on feedback after 2 years, the Ultra 82 has been updated for this season with some small changes in its structure and new more durable top sheet, similar to other skis in this line. The ski weighs 1070g at 164cm and measures 117-82-102 with a 250mm tip rocker. No tail rocker which makes it nicely stiff and fun for challenging snow or more extreme terrain.

Ultra 77 is build for fast & light oriented ski mountaineering but still offers a great tool for technical downhills. It comes at 950g for 163cm length (112-77-99) and has a slightly different structure than the two models above. It features a 250mm tip rocker like the Ultra 82.

Then there is Ultra 65 which obviously is a ski build for skimo racing. Again, not trying to be the lightest on the market, Hagan updated this ski with many features based on the experience from the 82 and 77 models. Super solid downhill performance coming out of a 700g for a 161cm ski (97-65-80).

Core – For All Mountain Ski Touring

In the Core series, we want to point you at the Core 89 model but also check out the Core 84 and Core 84 Lite models.

If you don’t need a specifically powder oriented ski, and want something more forgiving for the downhills than the stiffer Ultra series, then you might like the Core 89. But don’t worry, this ski might be something you will prefer in a resort as well.

The weight is slightly higher, 1280g at 170cm, than the Ultra line but its 89mm waist makes it more suitable all year round – from deeper soft snow to spring skiing. The ski also features a generous tip (320mm) and tail rockers (120mm) that will make it easier to turn for intermediate skiers.

There is more from Hagan so check out their website but the above models are what we are most excited about.

The Ultra 82 skis are fun to ski and an overall great performer. They are designed for true ski mountaineering with an intermediate to expert skier in mind. While some of its competitors might float better in 30cm+ of dry powder, these skis shine in challenging conditions – on hard packed or wind affected snow, in crust…

As the ski season in the Canadian Coast Mountains doesn’t want to take off this winter, I was not able to ski the Hagan Ultras in dry deep snow yet.

On the other hand, I spent enough days on them last spring in a variety of snow conditions. The biggest test was a 4-day Haute Route Imperiale ski traverse in Switzerland with a reasonably heavy pack and travelling through some big terrain.

The Hagan Ultra 82 skis have a 250mm front rocker which definitely helps in deeper snow but that’s not were they excel.

Being fairly stiff torsionally and with a more traditional camber than is perhaps usual for today’s touring skis, the Ultra 82s deliver when conditions are challenging and variable.

They are stable as they absorb most of the vibrations easily. They have a progressive stiff flex and provide really good edge grip. All this makes them nicely predictable.

Because they are on the stiffer side, I think it’s best to pair them with a stronger boot than Dynafit PDG or similar. Of course this also depends on your skill level.

I skied them with Dynafit TLT6 Perfomance boots (with boot tongues in) and it felt just right, but I can imagine skiing these with 3-4 buckle boots to really get the most out of the experience.

They are very responsive and fun to ski if you provide enough power. They handle higher speed, long radius turns very well if you can keep up with them.

The skis also feature a small tail rocker that seems to help with turns on hard packed an spring snow.

Unless you are always skiing at least boot deep powder then the Ultra 82 skis might be all you need. Also, such width is great for any touring in the early season and spring.

What We Think Could Be Improved

Perhaps keeping the same stiffness but decreasing the camber height could improve the float while not compromising the Ultra 82 skis strengths? It might be a worthwhile experiment.

Until the very last day, entries were coming in for the SkinTrack November Gear Contest that we ran from Nov 1st to Nov 30th. Today, thanks to our gracious partners we are announcing the two lucky winners.

Prizes and the Winners

The  total value of each prize packaged was $250 and included:

From over 200 hundred participants the random generator selected these two winners:

Thank you everyone for participating and congratulations to Steffie and Ian –  we will be in touch with both of you via email!

This gear contest is closed now. We will announce the winner in next few days.
Keep checking back as we will host another contest soon!

With support from these awesome companies, we want to help you get outfitted for your training and adventures in the new ski season.
Take advantage of this opportunity and make your ski budget last longer!

Here are the contents of a prize package two of you will win:

How to participate + Rules:

It’s very simple to get a shot at the prizes in stake:

This contest ended on November 30, 2016 and the winners were announced here.

During my recent visit to Outdoor Retailer show I had a chance to touch, flex and discover new skimo racing and ski mountaineering skis that will be coming out in the fall of 2016.
My overall observation was that now most manufacturers, instead of just few, will have a light line of skis. And I do mean light, and I do mean a line of skis. This means that going forward, whether you will want a light pair of 80mm skis, or 90mm, or even wider, then you will have more choice than ever before.
» For current lightest skimo skis see our comparisons chart.

The most interesting finding while browsing the La Sportiva booth, and apart from the new Stratos Hi-Cube ski boots, was that starting next season Ski Trab is partnering with La Sportiva to bring their skimo racing and light touring models to North America.
Below you can see that they will be La Sportiva branded Ski Trab skis. On the left, it’s the Maestro LS (940g at 171cm, width 75mm) suitable for lots of spring ski mountaineering, and on the right, are the racing models Gara Aero LS for men and women (715g at 164cm, and 685g at 157cm). 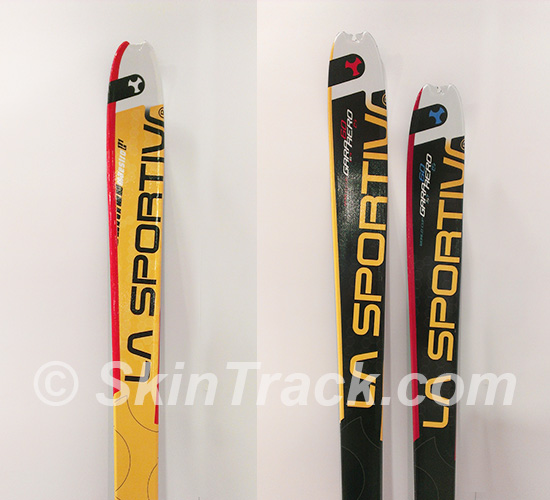 Here are some wider skis from La Sportiva, from left – Maximo LS men and women models (1310g at 178cm width 90mm, and 1205g at 164cm width 92mm)  that are intended for fun, light and fast ski touring. Then in contrast on the right you can see the new Vapor Float powder machines weighing only 1400g at 178cm while measuring 117mm in waist! 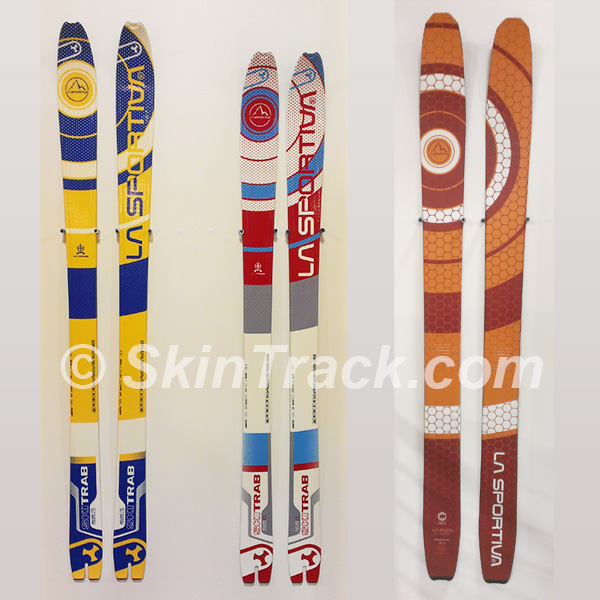 Just like with the new great looking Travers Carbon ski boot, Fischer is disrupting the market with some light touring skis as well.
The photo below shows their full ski touring and skimo racing line. The first two from left are Hannibal 100 and Hannibal 94 (1500g at 180cm width 100mm, 1250g at 177cm width 94mm) for ski touring in powder and soft snow. Then I want to highlight the Transalp 80, in green and fifth from left, as highly suitable for any type of ski mountaineering whether that be steep faces, couloirs, or just enjoying corn in the spring, weighing only 950g at 163cm in width 80mm! The Ranger line is freeride oriented – wider, fun but still pretty light given the widths. 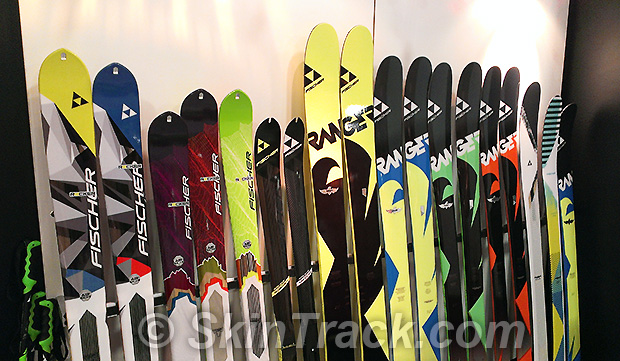 For ski mountaineering racing, Fischer is pushing the weight limits with their two models (photo below): 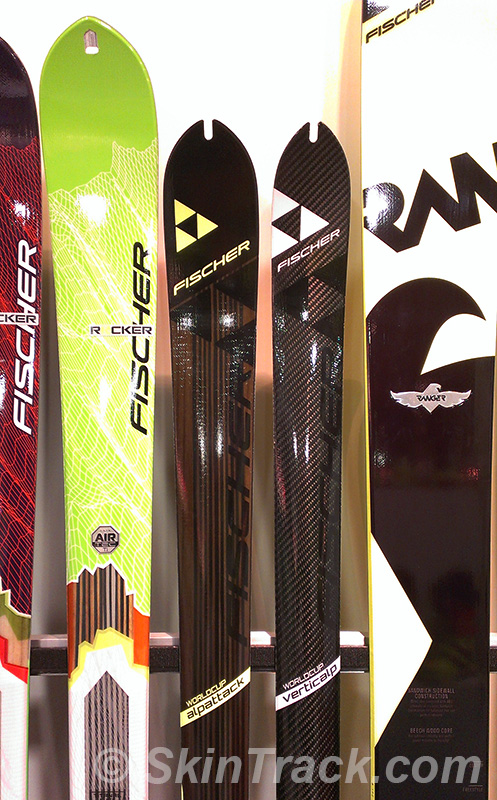 While Black Diamond has been producing some light skis already, their new full Helio line is screaming ski mountaineering in all conditions. On top of that, Black Diamond has moved production of its skis from China to Austria which should result in greater durability than before.
All Helio models feature carbon reinforcements, ABS sidewalls and ultra-light balsa flax wood core. All skis feel very light yet strongly built, and are shaped and rockered exactly for the type of snow or skiing their widths predetermines them. 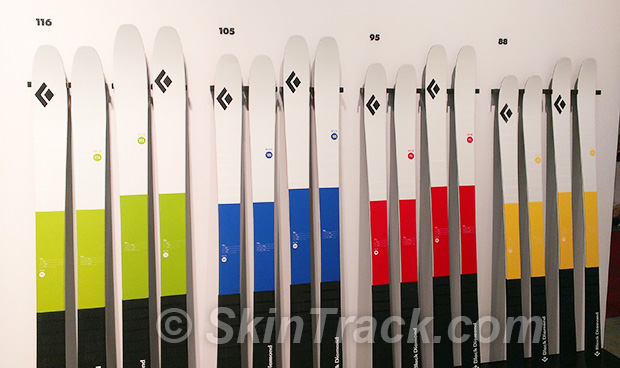 After liberating the world from heavy and clunky bindings in late 80s, Dynafit is now also known for its light skis in all kinds of widths and shapes. However, in last 2-3 seasons, the brand is poking into ever more into the freeride skiing. Here are couple of upcoming models from the photo below: 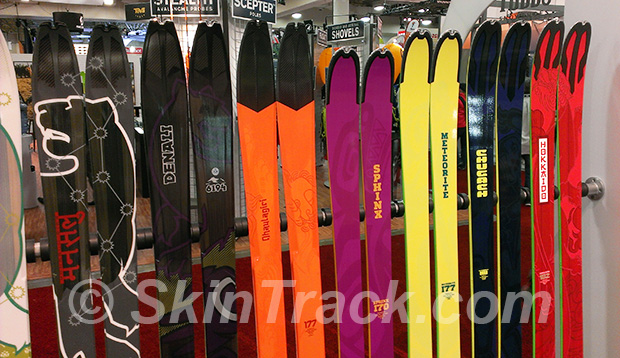 In skimo racing department, Dynafit is now using their flex tip technology and new side shaping (like in the above Denali and Dhaulagiri models) with different colours for let and right skis: 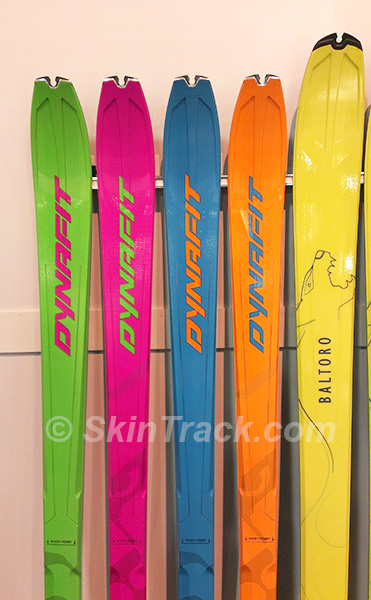 With long tradition in ski edges, boots and bindings manufacturing, Salomon has only started to build their own full skis in around 1990.
I went to the Salomon ski booth to mostly check out their new light S-Lab Minim ski mountaineering ski as it was developed in collaboration with Kilian Jornet, who previously skied Atomics for a long time.
The Minim ski will weigh 720g in 160cm and is slightly wider than all other skimo racing skis – with a side-cut of 97-68.5-83 it is 3-4mm wider in the waist. It features Karuba woodcore and CFX Superfiber reinforcement.

Like Fischer, Atomic is an Austrian manufacturer and has been building skis for decades. Although they have couple of touring and freeride models I was mostly insterested in checking out their Backland Ultimate line (on the right side below) as they are the brand’s most suitable for light and fast ski mountaineering: 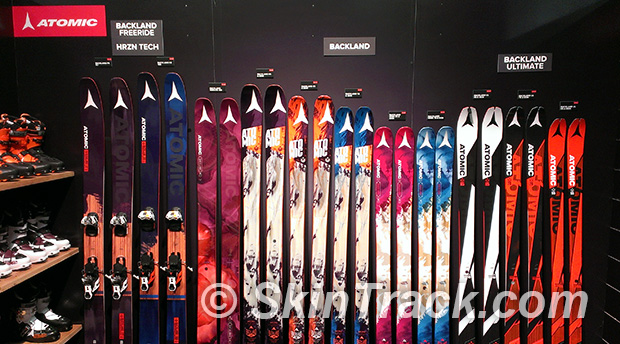 While Hagan has been manufacturing skimo racing skis for long time Voile entered the market only two years ago. However, both brands have a couple of lightweight models in various widths. I didn’t get any specifications for the below skis but both brands have improved their existing models and should not definitely not be overlooked when buying a new quiver next season.


Voile is a Salt Lake City manufacturer with reputation for well built yet lighter weight skis. Their skimo race skis have substantial rocker and can been clearly picked out in this photo. 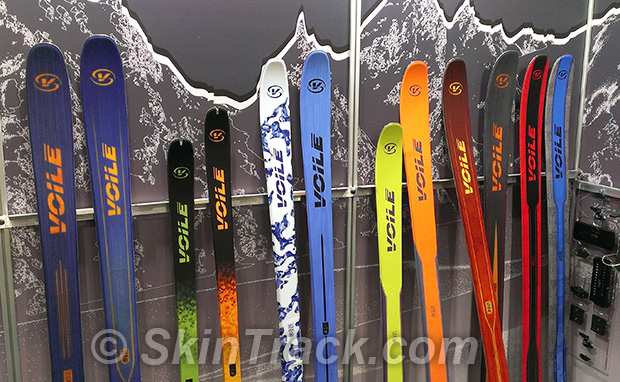