“How much lighter can they get? How much longer to 300 grams?” That’s what I keep asking myself every year now since new superbly light skimo boots are born almost as often as I change oil in my car. What do you think? How long will it take? 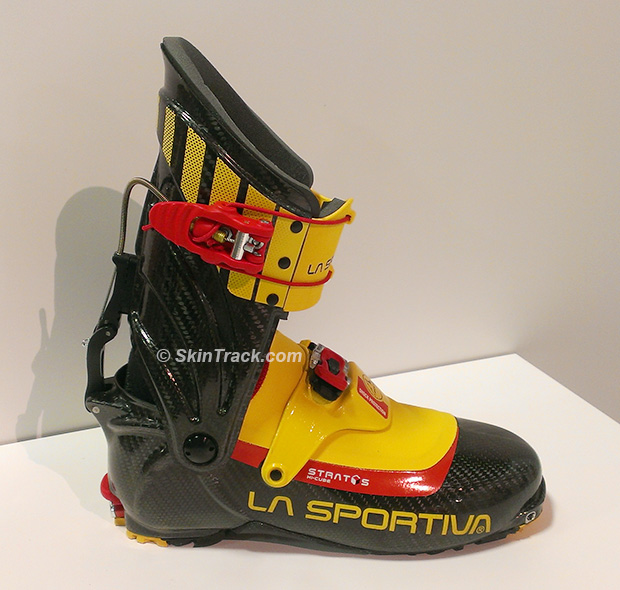 Now, a fourth generation of Stratos, the Hi-Cube must be one the best (if not the best) looking skimo racing boots ever produced! I don’t say that because I skied it, I say it because those are my impressions from the very first moment I saw them.
For reference, here is our coverage of the lightest boots evolution:

Many things become quickly apparent when you look at the Hi-Cube above and compare it to the previous three generations below:

As you can see, La Sportiva changed their design path somewhat, towards a more “open” boot, as the only way to make the Stratos lighter was to shed material. Also, the new boot comes only with a bikini liner for the foot  while for the cuff they opted to use foam padding that is glued in place. The open shell is something Pierre Gignoux (PG) and Scarpa were doing already, with PG also applying the hybrid liner solution. However, the new Stratos doesn’t look anything like the other boots.


According to La Sportiva, the new Stratos should weigh mere 450 grams per boot in size 27! It’s not clear whether this includes the bikini liner or not, but if yes then it will top the Race 400 from Pierre Gignoux that weighs 500 grams for size 26, thus, becoming the lightest skimo boot in the world. I suspect that Stratos’ weight will slightly increase with the actual production model, however, it shouldn’t be more than 20-40 grams.
Apart from incredibly low weight, the new shell is more tapered and should fit more snugly. Both the shell and cuff are fully carbon and feature reinforcement ribs for better power transmission and prevention against cracking.
Another novelty is a use of vibration “dampeners” that should absorb some of the big impact forces travelling upwards while skiing. These are commonly with carbon skimo boots and cause too much stress on the boots as well as on our joints.
With shedding material and creating a low volume shell, La Sportiva got rid off the heel step/ledge for crampons attachment and replaced it with a small hard plastic insert keeping the boots compatible with a variety of crampons.
For all of us that like to experiment with different forward leans for skiing the Stratos Hi-Cube offers three positions to play with, ranging from 10 to 19 degrees.
As for the cuff ski position locking mechanism, I don’t thing much has changed from the previous version. The horizontal closing system looks updated and should be somewhat lighter but function the same way as before.
The Hi-Cubes should be available for retail in the fall of 2016 and their likely price will be around $2500 USD, which should be cheaper than new Scarpa 3.0 but more than PG Race 400 or Dynafit DNA (the word is Dynafit won’t even bring these to North America going forward).
Without much further information, I believe that ISMF technical commission is already thinking about rewriting a couple of the rules on skimo gear weights this summer. The current minimum weight limit for men is 500g per boot with a dry liner, and 450g for women. Size is not specified which means that a “race legal” boot has different implications depending on the size you wear.