With a new season under way, we are going to continue the weekly roundups that you got used to last winter but we are going away from the “Skimo Racing Roundup” name and will be calling it “News Shorts” as there are often other ski mountaineering related items worth including besides just skimo racing. We believe you will enjoy this format even more!

Skimo World Championships take place every second year and this means the US skimo athletes continue to train harder than ever before. To qualify, and to have a choice at which events each athlete wants to race at the 2015 Skimo Worlds in Verbier (Feb 6-12), he or she first needs to prove the speed. The first two qualifying races took place last weekend (Dec 6-7) in Crested Butte, Colorado. Saturday’s individual race, at Irwin Guides, is known for great backcountry terrain and skiing. The Irwin race is a unique experience for skimo racers with the entire event taking place in the backcountry. Racers are required to take a 45-minute snowmobile or snowcat ride to the venue deep in the Elk Mountains.
Scott Simons (2nd place), a father of two and always improving, took off strong from the start and charged around the first lap at a blistering pace along with Marshall Thompson (3rd place). The two reached the first descent together with John Gaston close behind. Gaston, showing his perennial strength at descending, closed the gap and by the third lap, had a manageable lead on the two to win the race. Max Taam raced hard from 10th position to 4th by the finish and Jason Dorais battled illness to finish a strong 5th.
In the women’s race, Lindsay Plant (2014 NA Teams Race Champion with Janelle Smiley) stayed in the lead throughout the race with seemingly little competition. Sari Anderson and Jessie Young (new to the skimo circuit but quickly improving) equalled each other on the first climb. Anderson dropped out of the race and Young chased hard forcing Plant to increase her pace to maintain her lead. Nikki LaRochelle finished in third.
Sunday was a vertical race (also a team qualifier) hosted at the CB resort. The results changed a bit but not dramatically. Gaston dominated the men’s field again with Marshall Thompson taking a close 2nd. Local star, Brian Smith charged from behind, sitting at the back of the pack early in the climb and moving up to 3rd by the finish. The women’s race went again decisively to Lindsay Plant who was followed by Nikki LaRochelle and McKenna Douglas.
SkinTrack’s Eric Carter, who is trying to qualify for the US Worlds Team, placed 9th on Saturday and 5th on Sunday. Eric was happy with the results despite seeing room for improvement. His altitude acclimatization program seemed to work (he lives at 14 m in Squamish, Canada) and all the hard dry land training is paying off.
» Weekend results from both races – https://www.facebook.com/USSkimo/posts/795269280519181
» Great weekend race photos can be found here.
» Qualifying criteria and process can be found on USSMA website here.

In Canada, the Vert180 in Calgary opened the skimo racing season with its unusual format once again. The winner of the men’s category, trail runner and skimo racer Travis Brown, climbed a little less than 3000 m in 180 minutes of racing. Second and third went to Peter Knight and Ryan Burlingame respectively. The women’s category win went to Kylee Toth, who is coming back strongly after having two kids in the last several years! Michelle Roberts and Marg Fedyna finished second and third.
» Vert180 results are here.

Melanie Bernier is the only Canadian, and only the second North American, to place on a skimo World Cup podium and as part of her preparations for the World Championship season she went on to do a massive month of training. She  accumulated over 70,000 vertical meters during November in the mountains around Revelstoke and in Rogers Pass. Once again, Melanie will travel to Europe for an extensive period of time this winter and we can’t wait to see what exciting performances she will be up to this season.

If you haven’t caught the news yet then next couple of weeks will  bring another speed record attempt by Kilian Jornet. Like Melanie, he also did lot’s of training in November and, only few days ago, left France for South America. None of such records are guaranteed but if the weather on Aconcagua is at least somewhat cooperative, then Jornet should be able to set the bar very high for anyone that will come after him. 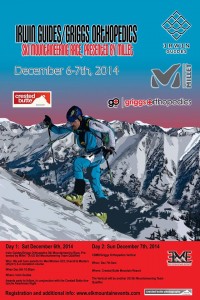 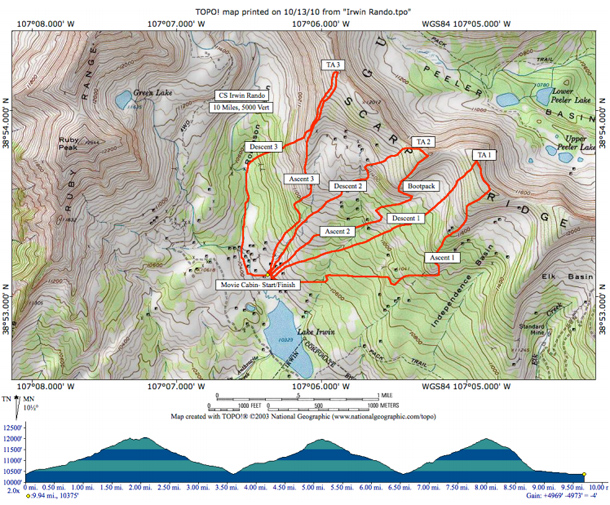 The following race report was sent in by Jeremy Rietmann – steadily improving Colorado skimo racer – who has shared his racing adventures with Skintrack readers before. Thank you!

So far for the 2013 season, the Colorado Ski Mountaineering Cup (COSMIC) races have been all about the one thing all of us love – Powder! The December 7th Irwin/La Sportiva Skimo Race provided a nice follow-up to the fantastic early season conditions enjoyed by racers two weeks ago at Wolf Creek.


Irwin provides a truly unique race experience on the COSMIC circuit with its backcountry setting, fairly complicated access logistics (made smooth by the great Irwin crew), late start time – and this year – great snow conditions. With nearly a foot of new snow, Irwin no doubt provided the highest concentration of smiles and spandex in Colorado on Saturday.

Saturday’s race was a prime example of the huge growth in both interest and talent in the US skimo world. 70 racers toed the line between all race divisions this year – a nearly 30% increase in participation from the 54 racers that joined in the fun the last time this race was held in 2011.
Irwin attracted top talent on both the women’s and men’s sides with Stevie Kremer, Sari Anderson and McKenna Douglas taking the 1-2-3 podium spots for the women, and Stevie Kremer besting her 2011 winning finishing time by 5 minutes and 19 seconds with a finishing time of 2:20:48.
On the men’s side, heavy (light?) hitters like John Gaston, Tom Goth, Max Taam, Brian Smith and Marshall Thompson battled it out up-front with John Gaston taking the win in 1:58:39. This bested Marshall Thompson’s winning time in 2011 by nearly 7 minutes. Brian Smith and Tom Goth took the 2nd and 3rd podium spots for the men, fighting it out until the end and finishing with only 5 seconds between them.
John Gaston once again rocketed away on the downhills and he and Max Taam just couldn’t stop racing as they both found their way back to Aspen later that day to participate in the Summit for Life/Chris Klug Foundation uphill benefit race – which John also won.
Top talent aside, Team Crested Butte’s recent speaking tour in the Front Range (Boulder area) appeared to pay promotional dividends with a number of first timers taking on a new adventure and toeing the line to enjoy a new experience. For any of you out there for which Irwin was your first skimo race – Welcome!
In the rec race, Matt Clark of Gunnison took home the win with Amelia Poppe of Crested Butte finishing in the top spot for the women.
Full results
» Here’s a PDF with the 2013 Irwin Skimo Race results.


A number of highlights and some wisdom

A special thanks to race director Bryan Wickenhauser and the good folks at Irwin for making this race possible. Next up on the COSMIC circuit: Frisco Randocross on December 31st – New Year’s Eve! www.cosmicski.com
Jeremy Rietmann – @JeremyRietmann