World Cup racing action moved to Courchevel France last Saturday. The weekend began with a 1,700m vertical ascent individual race including 6 climbs with two boot packs and a technical via-ferrata section. The Italian men began a strong weekend with three athletes in the top group. Robert Antonioli (ITA) took the win with a strong final descent while the 2nd – 4th finished all within a minute of each other. Killian Jornet (SPA), normally a dominant racer did not finish due to stomach troubles.

In my side I try to start the race, but after 50m I was without energy…need to try to eat and recover.
-Killian Jornet Facebook

Laetitia Roux (FRA) dominated the women’s race, taking control early on and skiing into the finish with a comfortable cushion over Sophie Dusautoir Bertrand (AND). Will Roux be threatened at all this season? Melanie Bernier (CAN) finished in an impressive 6th place overall (4th among senior women) and had this to say about her race:

I had a good race, trying to stay as consistent as possible throughout and focusing on energy management. Only did I start to loose momentum at the end of the last long climb but it was to be expected. I crossed the finish line in 6th place which I was pretty happy about, closing the gap on some of fast ladies.
-Melanie Bernier

The low-angled vertical course (540m ascent) allowed for some exceptionally fast skiing. The start is crazy fast – see the guy double poling at 0:41sec in the video below and at 1:16 it is hard to tell the difference from a Nordic ski race! Amazing. In the senior men’s race, Matheo Jacquemoud  (FRA) set the pace from the outset but Damiano Lenzi (ITA) pulled out all the stops and passed Jacquemoud near the finish to win in a time just shy of the course record.
In the senior women’s race, Mathys Maude (SWI) pushed the pace hard but could not hold on when Laetitia Roux accelerated, eventually taking the lead with a twenty second gap at the finish. The lone North American, Canada’s Melanie Bernier finished 10th overall, just under four minutes behind Roux. Meredith Edwards (USA) did not start.

Knowing the course was a must since it was full out from start to finish. I had a great race, keeping my eyes on the lady ahead of me the whole race and passing right at the end. I’m happy with a 9th place considering I am not much of a vert racer! Next stop, Italia!

Two races on the North American calendar happened this past weekend. The Whitefish Whiteout in Whitefish Montana lived up to its name with thick fog blanketing the course throughout race day. An impressive number of racers turned out for both the race and recreational divisions despite the dreary weather. The race division took off at a civilized pace with a line of racers stretching out under the ski lifts. With cash on the line for the fastest ascent up the first climb, local Ben Parsons (USA) surged at the halfway point. Eric Carter (USA) and Peter Knight (CAN) tried to match the pace and Carter skied in to the  lead by the top. Carter and Parsons traded positions throughout the race and sprinted to the finish with Carter taking the win.
» Whitefish Results

The Berkshire East course was more challenging this year with a longer bootpack (repeated each circuit) located in the woods just of of the descent trail giving one the opportunity to see how close other competitors were. Natural snow was thin, adding to the challenge, stepping on lots of downed trees, rocks, and leaves in the booter.
-Jerimy Arnold

The World Cup is headed to Italy with the much anticipated Pitturina Ski Race. There will be a sprint on Friday afternoon and Sunday morning an individual race along the Pitturina route.
No racing in North America this weekend with the postponement of the Mad River Valley ski race in New England but there are local race series taking place during the week in Colorado and Salt Lake City. With the weekend off, the racers will be getting ready for a slew of races available throughout NA on February 8th and 9th! 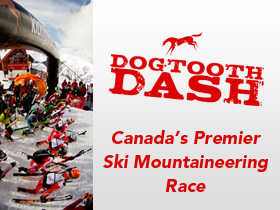 You can also put on your calendar this year’s Dogtooth Dash at Kicking Horse Mountain near Golden BC. With SkinTrack crew involved in organizing, expect a full weekend of skimo action March 21st – 23rd.
Registration is about to open so follow the event on Facebook and keep an eye on the info page to stay up to date with the latest information!