Technique for boot-packing and running seems fairly straightforward since walking and running are the most natural movements to humans. However, several critical details do make a difference in efficiency.

The weight of the ski boots, loss of ankle agility, snow and handling of the ski poles all add to the complexity of simple movements we are born to easily master.

Training for effective and efficient boot-packing for longer (slower) races should be somewhat different from training for fast sprint races and running so we are discussing each on its own.

This article is an excerpt from our Manual For Ski Mountaineering Racing ebook. 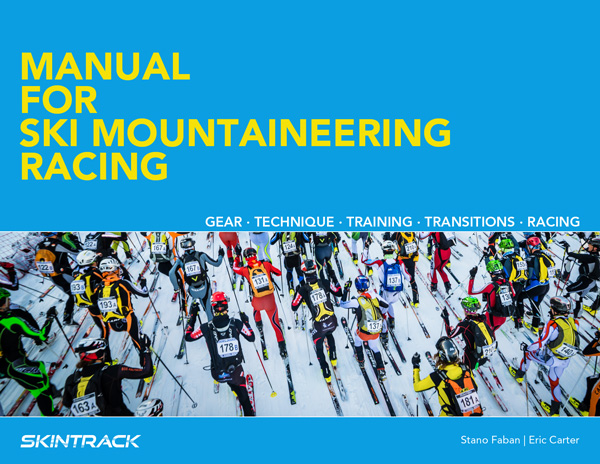 Usually, in longer races, boot-packing is up a steep slope with skis attached to your backpack. The important thing is that you use double-poling technique for this – planting both of your ski poles at the same time. 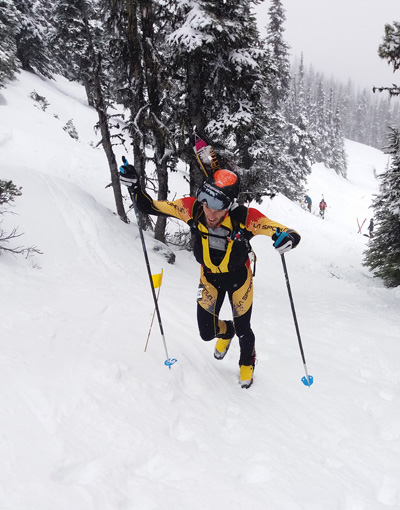 Perform 3-6 climbs during which you double-pole on every third or fourth step.

Throughout the first half of the arms motion, you are using your arms for pulling, while in the second half (once ski poles’ handles are below your shoulders) you are using them for pushing, finishing with a full extension.

Intensity will be dictated by terrain but you can easily incorporate such a boot-pack section into your tempo intervals (zone 3).

It’s less suitable to incorporate these into your VO2 max intervals (zone 4) because of the time required to transition unless you are planning on performing the whole interval by boot-packing.

All elite racers use the double-poling technique during a boot-pack. They plant their poles, hunch themselves with their heads tilted down, then pull and push with force while their feet are doing three to five steps in one cycle. Their cadence (step frequency) varies greatly depending on the slope angle and depth of the track.

Find a safe, 30-40 degree slope that will accommodate a 15-30 m (50-90 ft) vertical boot-pack. The snow should be fairly hard as the ideal foot penetration depth for good steps shouldn’t be more than just above your boot soles.

Perform 6-10 climbs with the double-poling technique described in the “boot-packing for longer races” above, but with your arms maximum force pulling and pushing on your poles while running (not walking) up the track.

These should be maximal speed efforts, so heart-rate intensity is not important, with about 1-2 minutes of recovery between the climbs.

All top sprint racers are very fast going up short boot-packs, covering four to six strides per every powerful double-poling cycle with a cadence of around 90-100 steps per leg per minute.

In the video below, around 30sec and 1min 30sec, you can watch elite racers running up during a sprint race at the 2019 World Championships.

Some races have flat or almost flat sections that are covered on foot (with skis on the pack) that could be on snow or on dry ground (gravel, pavement, grass). These sections are covered by running. 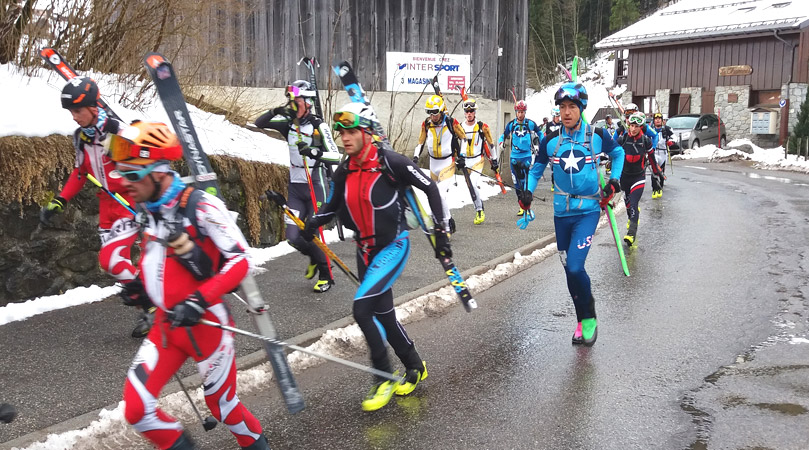 To train for running on the snow, complete 6-10 maximal efforts of 10-15 seconds with 1-2 minutes of active rest between.

Use double-poling technique and lean into the stride, just like you would running in shoes, planting your poles far ahead of you and doing about 6-8 strides per double-poling cycle.

Best is to practice on groomed or hard-packed snow with minimal or no foot-penetration.

To train for running on dry land, complete 5-8 efforts at speed of zone 2-3 intensity and 10-20 seconds in length with minimal or no recovery. For these, you can carry poles in your hands without using them for half of the efforts while double-poling during the rest. Avoid doing these at your maximal speed as running on dry, hard ground in ski boots is quite taxing on all your leg joints. The ideal surface is grass or soft-packed dirt.

On-snow running sections are regularly featured at the top of boot-packs at various levels of competition, while dry-land sections are almost exclusive to long races that are in the spring months such as Pierra Menta, Patrouille des Glaciers, etc.

Top racers perform double-poling during the on-snow sections and usually carry their poles on dry land to prevent from breaking their pole tips.