I am the founder and the main author of Skintrack.com. On the athletic side, I am proud to be a member of the Canadian National Ski Mountaineering Team. Beyond that I make my living as a freelance web designer and, no surprise, I spend most of my free time outdoors.
Like everyone, I am still learning and improving my skills but I like to share what I have learned so far. You are welcome to join me on this journey. 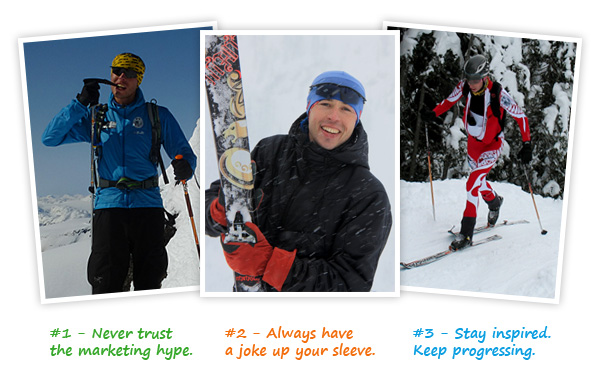 From Swimming to Self-coaching at 16 to Ski Mountaineering

I started “skiing” when I was about four years old and started backcountry skiing when I was twelve. All this was back in Europe (Slovakia) where ski mountaineering has a strong tradition also as a competitive sport.
Between the age of 8 and 14 I was involved in competitive swimming and then fully transitioned to triathlon. In both swimming and triathlon I made it as far as becoming a Slovak National Champion.
Since 16 I was part of a bold 3 man (boys back then) group that tried to find and validate as much information about endurance training as possible. We trained together and shared lots of info. But essentially, each of us coached himself to some great results. I continue on this self-coaching path ever since.
After moving to Canada I was instantly amazed by the vastness and the wilderness of the outdoors yet I went hard at triathlon until 21 while ski mountaineering and cross-country skiing in the winters.
Then after a tough realization that sport probably wouldn’t be my bread maker I went to school and backcountry skiing quickly became my #1 passion. Free off pressure of summer competitions I could explore the outdoors much deeper. Ski traverses, great powder days and steep skiing were only a natural progression.
Then the start of rando ski mountaineering racing in North America presented me with a chance to compete once again. And since 2002 I was always (with a small break) involved in the development of this sport on this continent, whether as a racer or an organizer.
Currently, I am devoting most of my no-work time to preparing for the next winter season in which I want to continue representing Canada internationally.
Dreams of another Pierra Menta and new speed ski traverses are only more gasoline on this fire.

Achievements and adventures I value the most: