I believe everyone has their mountain dream missions whether it be a ski traverse with friends, a steep line descent, or a new climbing route. Everyone has dreams and everyone gets inspired.
One of mine came to life when I first skied off Mount Matier about 10 years ago. That evening, I and Miki (good friend of mine) imagined skiing the summits of Joffre, Matier, Spetch and Slalok in a day. We planned to have a camp on Matier glacier to allow an early start and a place to return for a nice dinner. 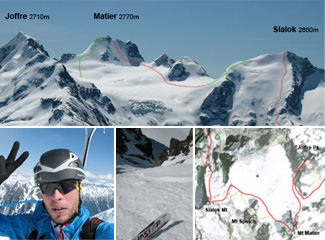 We never went for it.
And in the years since I only skied the N ridge of Matier and Aussie Couloir on Joffre. I never summited or skied Slalok, nor skied the NW face on Matier.
But as time passed the dream was still there, however, taking on a different shape.
I realized that if we ski Slalok then it has to be its north face, otherwise, there is no point.
Then as we progressed it became clear it would be possible to do it all in one big day – starting at Cerise Creek, finishing at Joffre Lakes.
Finally, in the past 3 years, I twisted the dream further as I became more inspired by what ski mountaineering racing was teaching me and seeing how our Canadian skimo racing team was progressing. More came from John Baldwin’s exploratory spirit, Kilian Jornet’s running quests and Ueli Steck’s speed climbs.
The dream was the original but I wondered how fast it could be done.
And an integral part for me is always to do such missions in an unassisted way – you carry all you need, otherwise, there is no point.

At the end I decided to leave out Mt Spetch. Its north face is nice and around 40 degrees but it is only 200m high, and the whole peak is kind of small within its spectacular surroundings.
The final route became – start at Cerise Creek, summit Joffre, ski Aussie, summit Matier, ski its NW face, summit Slalok, ski its N face, finish at Lower Joffre Lk.

The most fun but somewhat intimidating part of the whole thing was that I would be skiing the NW face of Matier and the N face of Slalok for the very first time. I liked the unknown element.

For bigger speed missions I like to plan well because I hate coming out short-handed. By that I mean either not being able to pull it off or not being able to go as fast as I would like to.
I didn’t know whether it was still possible this year. I didn’t know anything about current snow pack and temps as I have not skied at Duffey Lake since early February. So I dug up some recent weather stats, and started to follow temps and weather about 10 days prior.
I knew data knowledge is good but a personal experience would be the best. On May 13th I went up Cayoosh Mt to get a feel for snowpack, and what temps and sun were doing. Also, that I could snap photos of Slalok’s N face so I could study where is the safest to ski it should the day be very warm.
Final piece of my puzzle have not come together though – a ski partner. However, there was no time to stress about it as it fell through at a late stage and the right conditions (snow, day temps, weather, desire…) were/are running out.
I decided to go through with it solo as I did in the past when I couldn’t agree on conditions with a friend over a speedy Spearhead Traverse mission.

Some facts and the day’s route

I started a bit after 6am (May19) from the bridge over the first creek below the Duffey Lk road at Cerise Creek. The start gave my mission “a bigger life perspective” as there was no bridge/log over the second creek. But quickly I managed to find a log crossing it about 100m down.
In 5h 58min I finished on the bridge over the creek that drains the Lower Joffre Lk, after some summer trail and forest navigating as all Joffre Lakes were unfrozen on their perimeter and couldn’t be skied over.


All in all, my watch measured 2520m of climbing and descending (the start and finish happen to be at almost the same elevation). Fresh hard tracks all day long, up and down.
3 summits, 3 classic descents. What a day 🙂

There was one thing that struck me during the day – I crampon boot-packed from the bottom of Aussie to the summit of Joffre in about 35min (400m), and I feel couple of weeks behind my fastest this season. That means that someone much more skilled can surely boot it up in 20-25, maybe Steck even faster, that would be something to watch!
Here are some route points and times that further inspire me and can serve anyone as a reference if they want to repeat it:

After getting it done I believe I can do it quite faster, and it likely could be done under 4h30 by the fastest skimo racing Euros. But not while going solo, skiing two first time lines and visiting new places. That only could have happened in a more balanced way 🙂