It doesn’t happen often that a big company like Scarpa lets slip out a product photo while it is only in a prototype stage.
The first Scarpa Alien boot was spotted some years back at skimo world cup competitions, only few approved racers were testing it. Then its carbon cuff version came into being and in 2011 both boots were officially released. 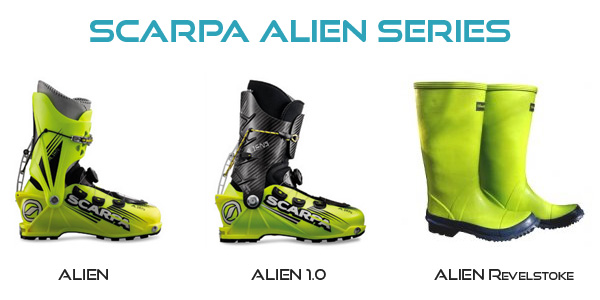 The Alien series is known for its comfort, lightness and innovative features. However, it looks like Scarpa is pushing the envelop of design even further.
Now, the new Scarpa Alien Revelstoke is even lighter (with a carbon sole), more comfortable and should be super fast in transitions as there won’t be any buckles getting in the way!
The name have been chosen after a Canadian powder town whose residents’ winter footwear inspired the Scarpa engineers.