The lightest boot on the market, they race well but are somewhat fragile. A big investment with big weight savings!

Departing from the tradition of developing their own lightweight boots in-house, Dynafit has begin licensing the work of renowned boot maker Pierre Gignoux (PG). The RC-1 is Dynafit’s lightest offering coming in at a svelte 507 grams per boot in size 27 – well below the options offered by competitors such as La Sportiva and Scarpa. The low weight of the all-carbon boot is immediately apparent when you slip it on.
One of the most noticeable features is the liner which only goes as high as to cover the ankle bones. Above, foam padding on the outer shell clamps onto the athlete’s shin, making an upper liner unnecessary. The liner is incredibly lightweight but this comes at a cost to durability. Several wear points exist at the heel and near the cuff pivots. It would be interesting to try the bikini-style liner available from PG or something similar to sock liner (but cut to ankle height) used in the Scarpa Alien 1.0. A tighter fitting sock liner might improve the fit as well as reduce wear.
The boot uses a simple vertical throw lever for locking the cuff into ski mode (similar to the Scarpa Alien lever). This is different from the ‘Ultra-Lock’ lever on previous Dynafit Dy.N.A. and PDG boots but requires less cutting of the skimo race suit bottoms and results in less snow making its way into the boot. The lever is easy to flick down and it accurately snaps into ski position without a need to guide it. Placing of the lever’s lock post (the bottom piece), skimo suit or pants don’t cover it, unlike with the Ultra-Lock system, making for a slightly faster/easier transition.
The foot-locking mechanism is a ratchet strap on the instep and a cord tightened by the throw lever to tighten the upper cuff. The 2016 version of the boot, called DNA now, features ratchet straps on around the upper cuff as well, to provide easier fit fine tuning (though, likely at a small weight penalty). Lower tightening is also accomplished with a quick lace system similar to that seen on many Salomon running shoes.
Early (black and white) versions of the RC-1 were sold with a relatively thin sole. This sole was poorly glued to the boot and was prone to damage. Inline changes (both to black/white and green/pink) brought a new, higher quality sole with better glue. Luckily, PG is friendly with warranty requests and will replace the old sole with a new one.
It is worth noting that no version of the RC-1 uses Dynafit’s proprietary toe tech fittings (which is odd but understandable given an independent manufacturer), but rather a custom fitting designed to be used with the RC-1 bindings (also engineered by Pierre Gignoux). I decided against mounting the RC-1 bindings on my race skis and instead went with the traditional Low-Tech Race. To make a good fit, this required a small amount of surgery to remove a few mm of sole on the bottom of the toe. Stepping into a Low-Tech, the binding snaps and locks but not quite as tight as it does with Dy.N.A. boots. Interestingly, when paired with Plum Race bindings, the binding does shut completely. Despite this being a bit disconcerting, I’ve never had a binding release and I am comfortable skiing them on steep terrain in a race.
The boot fits slightly wider and longer than traditional Dynafit boots. The sole is also perfectly flat and quite hard. I immediately put a custom insole into the liner to get the support my, generally not very picky, feet needed.
I used a variety of crampons with the RC-1. The only compatibility issue was with the front welt. Unlike most plastic boots with a well defined edge on the front welt, the RC-1 welt is very smooth and rounded (and made of carbon). This made any crampon with a toe bail feel less secure. Most commonly, I used the CAMP Race-290 crampons.  Strap-on crampons work fine as expected. While racing the Trofeo Mezzalama last spring, steel crampons were required for sections of exposed ice. I had only a pair of BD Sabretooth Pro crampons (clip-on version) which generally stayed attached despite the minimal welt. While I am suspect of any crampons on race boots, these boots are particularly insecure unless using a strap system – be careful.
My boots have seen about 70 days of use, mostly racing. My main durability issue has been the liner but my lower shell also developed a crack in the carbon that propagated out from the cuff pivot. PG was quick to replace the shell when I stopped in their tent at the Pierra Menta!
It is worthwhile to note that PG makes a slightly heavier version – called Black – that appears to be much more robust for training and mountain adventures (it has a covered tongue rather than being open) but is also plenty light for racing (600 grams).
Overall thoughts: If you want to race on the same boot as the best racers in the world (Laetitia Roux, Anton Palzer, Kilian Jornet, Emelie Forsberg, etc…) these are the right pick. They are the lightest available, ski well, and are fast in transitions. Just take good care of them!

Things to be improved:

Looks like all skimo companies have been pretty busy lately because I don’t even know where to begin with this gear summary.
Let’s start with something you might have already spotted on Skintrack few weeks ago.

The new La Sportiva Syborg boots and skis should be quite exciting as they will bring more competition into the affordable-race-gear category. 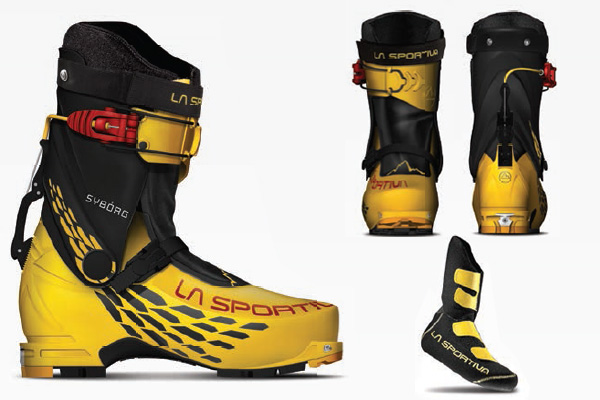 The Syborg boots should weigh 800g at size 27. See this article for more details on these boots and their sibling Syborg skis.

Probably, the most exciting news is that Scarpa will finally bring a full carbon skimo race boot to the market! This is their stab at the feather weights such as Pierre Gignoux Morpho or La Sportiva Stratos Cube boots (or Dynafit RC1… see below). 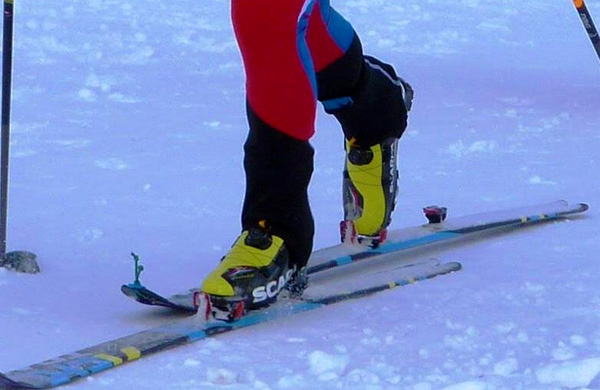 As you can see, the Scarpa Alien 2.0 resemble more a soccer shoe than a skimo boot but that’s maybe because they are meant to make you to kick some ass. Their weight should be around 600g for size 27 or so. More pics can be found on WildSnow.
Perhaps the coolest feature of these boots is not the full carbon but the cuff vertical locking mechanism which locks the boot into a ski mode automatically when you step into your heel bindings! This feature is shared with Scarpa’s ski touring model EVO F1 pictured bellow. 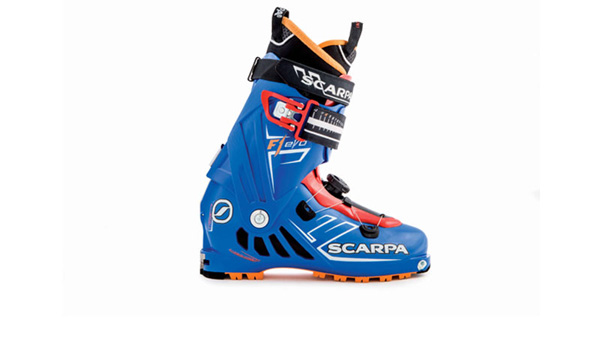 And here is a photo from 2010 when only very few people had the first ever Alien boots. While still testing them, Florent Troillet (one of skimo’s past greats), beat Kilian Jornet for the 2010 World Championship individual title, but as you can see he was clearly instructed to keep the BOA system a secret.

As of a year ago, my personal feeling was that for Pierre Gignoux to survive the evolution war of the big skimo brands he will need to sell his company to one of them. It didn’t quite happen but it came close – Pierre Gignoux licensed his Morpho 400 boots and bindings to Dynafit who will bring them to the market under the “RC1” label for next season. 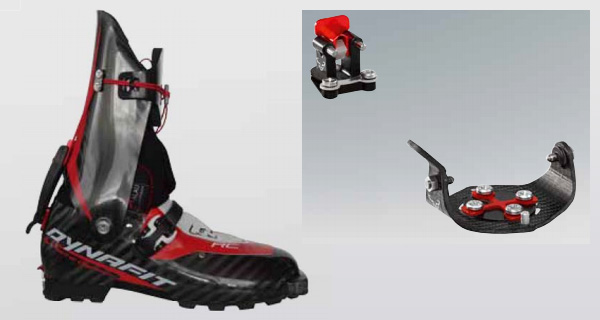 The weights should be the same (or very close) to the originals – RC1 boots at 500g for size 26 and RC1 bindings at 75g.
» Here you can compare all lightest boots currently on the market.
Lots of new gear will be coming from Dynafit for the next season, however, the rest of their skimo racing lineup looks to be getting mostly a visual face-lift.


The DyNA Evo’s will go black-and-red while keeping the weight at virtually the same as their white-red predecessors, at around 690g for size 27. And the PDG boots will go grey-and-blue from white-blue and the weight could perhaps go just slightly up, to 830g for 27.
Two new things for both boots will be:

Their racing skis seem to mostly only get a new top sheets as dimensions and weight are virtually the same, however, the claim is they have a “flex tip” feature like their current Cho Oyu skis. And so the DyNA Race skis will be 710g at 161cm (99-65-80) and the PDG 790g at 161cm (99-65-80).
» Here you can compare all lightest skis that are currently buy.


And here is something really exciting for powder hunters that don’t like tp compromise on weight (myself including). The new Dynafit Denali skis should be the killer for 10,000 feet powder days as they are listed to weigh only 1290g at 176cm for 131-98-116 dimensions! Personally, at 6′ 1″, I would either go with that length or 184cm which should be 1390g and 1mm wider all around.

These bindings are not a new item as they were introduced this season, however, they didn’t receive as much attention as other gear so I want to shed some light on them especially since I am personally using them.
Not an engineering inovation from Hagan themselves but rather a smart re-branding move like Dynafit with RC1 boots. Originally, these are ATK SL-R bindings which means top quality, but since ATK is not interested in bringing their products to the North American market Hagan decided to do it for us, skimo racers.


The ZR weigh 116g per foot and are one of the finest currently on the market. And the price of $599.95 doesn’t hurt either (at Skimo.co).
I put in about 10,000m on them for up and 10,000m for down so far. More testing is obviously needed but given my previous long term experience with ATK bindings I don’t expect major surprises.
» And here you can compare all lightest skimo bindings you can currently buy.