Every year, I am amazed with progress of speed oriented ski mountaineering in North America, whether that be the actual performances (racing or speed attempts) or the growth of passion for such things.
To me, mountains and speed represent joy, freedom and progress, each on their own. Blended together, one finds plenty of reasons to not sit still.
However, we are happy to sit still today 🙂

Obviously, a big mountain like Rainier is on the lists of many people. And it is an obvious target for speed loving ski mountaineers as well.
Our yesterday’s attempt was spurred on mainly by Eric’s obsession with it and a small window of opportunity between stormy weather periods. And so the day before three of us – Eric Carter, Nick Elson and I – set out from Vancouver to give our sea-level lungs a beating.

Up to Camp Muir and to Ingraham Flat

The forecast was calling for a sunny day with no winds, and that’s exactly what we got.


We started at 6am from the Jackson Visitor Center at Paradise parking lot (5400 ft = 1646 m). Very firm snow and fields of frozen boot tracks made for slippery skinning.
Right from the beginning Eric set a fast pace with Nick and I trailing behind. Once out of the trees and above the rolls the travelling became easier as we were able to find patches of untracked snow.
Traversy terrain features and the very firm conditions were proving a bit challenging as my binding’s toe piece released couple of times on me. With each time becoming more difficult to close the gap on the boys.
We were making good time up the Muir Snowfield and towards the Camp Muir. Over an hour has now passed and I could feel that the releasing toe piece was not the main reason I wasn’t going very well. I just wasn’t feeling super hot since the start but I usually come around after 45min or so, then hammer from there on.
Not knowing how Eric and Nick were feeling but seeing them having about 3min on me by Camp Muir (10188 ft = 3105 m), we reached it in about 1h 35min, I had to honestly decide what was best for us. Feeling weird overall, I yelled behind them that they should continue without me. They shouted back that I should go on as they knew I usually come around.
Since a long traverse followed I thought I might recover but by Ingraham Flat (around 11000 ft = 3350 m) my engine light definitely came on. Altitude played some role too and once more I waved at the boys to go for it without me. Nick had the rope, so they didn’t really need me.
Here is how Nick and Eric were dealing with the altitude:
Nick: “I’d say it started to be quite noticeable around the base of the Cleaver. By the summit I had a pretty good throbbing in my head and just couldn’t move very quickly.”
Eric: “Below the cleaver I felt good and above, increasingly out of breath. No headache or nausea. I think we got to descending before anything serious could kick in. Certainly being acclimatized above sea-level would have been useful. I can see the Pacific Ocean from my street so that is really no help in the mountains.”

Before I skied down I watched the boys climbing while eating at Ingraham Flat. Here are some words from Eric: “The cleaver went quickly without crampons though we put them on higher up. Two crevasses had bridges but the route was fairly straightforward and direct. The summit rim rocks were a welcome sight and from there it is a quick run over to the tippy top.”
The summit of Mount Rainier is at 14,411 feet (4392 m) and Eric’s Suunto watch measured a total of 2777 m of ascent.


I didn’t see them skiing as I was at the car by then but they had as good snow for the descent as me. The top part was obviously a bit more challenging though, Eric: “Icy wind blown crust with pockets of powder – good power-sliding on the skinny skis! Even in the feather-light Dynafit race boots skied well.”
From the cleaver down they had “…nice spring conditions. Luckily the Muir snowfield stayed fairly cool so the hard crust that made skinning up trickier was screaming fast on the descent.”
Nervously watching up the slope from my car, once I saw them ripping I ran up the snowy trail-head in my sandals to share the moment with them. Amazing, we knew a good shave off the old record was possible but we sure didn’t really expect 4h 19min 12sec!
Surprising things happen when you dare to try and you give it all. 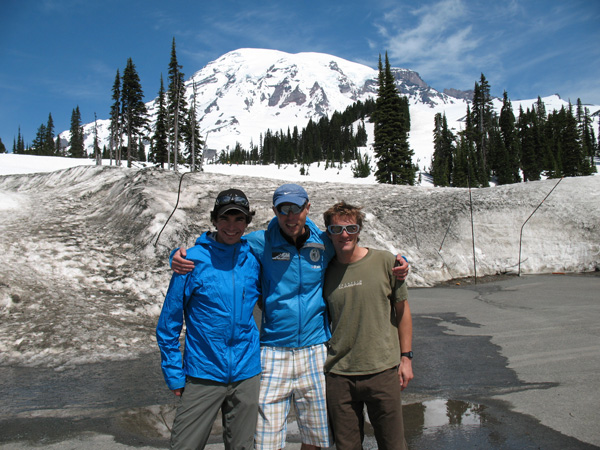 On being fast in the mountains

Nick is not an obsessed skimo racer but has lots of alpine climbing experience thus on the way back I was curios what makes him fast.
He summarized:
“Sadly, there’s no secret to skiing fast, as I’m sure you know. You have to train, but I suppose that if you’re inherently a bit lazy like me, it helps if you can do fun stuff that also happens to be good training.
A big part of alpine climbing is actually planning, strategy and logistics and I’ve learnt a lot about that sort of thing from some very good climbers and I think a lot of it is very applicable to skiing.”