The following report was submitted by our East Coast SkinTrack correspondent Jonathan Shefftz.
After the March 2 100-percent backcountry race Mount Greylock in the northwestern corner of Massachusetts, the Eastern circuit shifted much further north for the March 8-9 weekend races at Jay Peak in Vermont and then Owl’s Head just across the Canadian border in Quebec.
Overall, Equipe Quebec dominated both the start lists and the podiums, although the East Coast Team Hagan and recently returned Chamonix expatriate Nina Silitch provided some strong American representation. 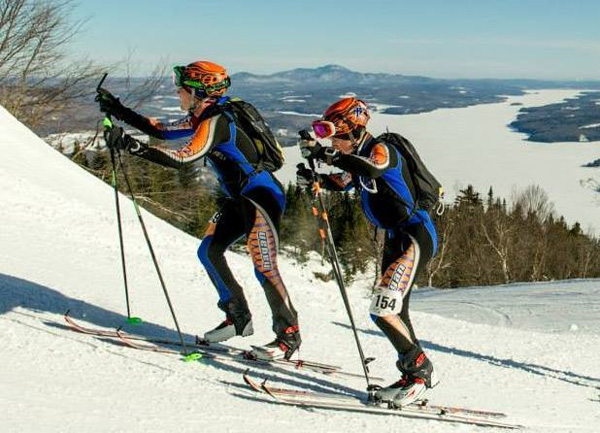 Both races were rescheduled from their original January dates on account of various “wintry mix” nastiness at the time.  Jay has held a rando race annually since 2005, although recent years have been in somewhat of a decline, with participants sometimes in the low single digits, and the course featuring loops at the nordic center.  However, the Quebec Dynafit rep Jeff Rivest has reinvigorated the race with an entirely new layout for this year.  By contrast, the Owl’s Head is entirely new, and ascends via a new backcountry sector, so this was an entirely new venue for everyone.  Racers recorded the vertical at 4027’ for Jay and 4307’ for Owl’s Head (or in meters of course for the Quebec Strava reports!).


For Jay, the top five men finished within four minutes of each other, and traded places through the race.  George Visser was assessed a time penalty for missing a critical turn (and ending up on a bump run instead of a glade), and was demoted to second place behind Leigh Quilliams.  Josh Flanagan blew past his fellow Team Hagan member Jerimy Arnold at the final transition to take the final spot on the podium, although Jerimy compensated somewhat with the dramatic move of tripping a bamboo pole at the finish to blow up the finish tent.  (Your faithful correspondent was  unable to attempt to repeat his 2008 win due to teaching an avalanche course on Mount Washington NH.)  Philippe DeGuire rounded out the top five only another six seconds later.
For the women, Nina Silitch took the win, and was ninth overall, with Danielle DeGuire several minutes behind her, and tenth overall.
The top five the next day at Owl’s Head were all the same men, although somewhat reordered, with the top three spots going to George Visser, Jerimy Arnold, and Josh Flanagan (despite a 30-second time penalty on the two J’s for missing a turn), then Leigh Quilliams and Philippe DeGuire to round out the top five.  Top women were once again Nina Silitch and Danielle DeGuire. 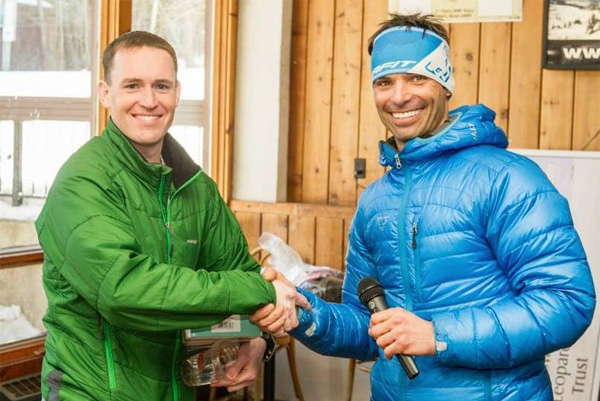 The combined results for the weekend were not just a conceptual exercise, as a $500 cash prize went to George Visser and Nina Silitch. 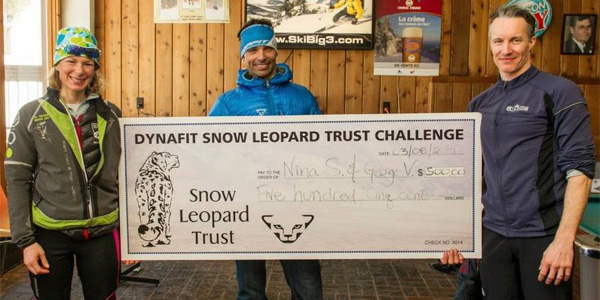 Coming up on the East Coast:

Looking ahead, the next stop will be the NE Rando Race Series venue of Magic Mountain in southern Vermont, on Sunday March 16.  The good news is the course has been flagged since Monday.  The bad news is that as of press time the flags are being buried in up to 27” of new snow.  The good news is … well, that should be obvious!
The Full Course will start off with three laps on the very nicely graded skintrack of 1520’ vertical for each lap.  The then final lap will 960’ vertical, starting off with a nicely graded skin, but culminating in a 270’ vertical extremely steep boot pack that will seem much longer!  All descents will be on the ungroomed bumped-on Witch to the extremely steep Red Line (in full view of the chair lift overhead!), making the race feel much longer than its 5520’ vertical.
More detailed course information will be posted here:
http://nerandorace.blogspot.com/2013/09/course-layout-magic.html
Team Hagan will be out in full force, and probably Nina Silitch too.  Plus rumor has it that U.S. Department of Homeland Security might be hearing some interesting declarations about large quantities of carbon fiber at the Quebec border crossing!