This is a very nicely written personal race report from only a junior racer Katarina Kuba – she regularly races the Canadian series and decided to check out Alpental this year.
Before you dive in I want to say that Alpental’s skimo race is a great one to attend. It was my first race in North America and I visited couple of times but couldn’t make the schedule work in the past few. Since then it grew into a festival style event with demos and clinics. The attendance swell to 160 last Saturday!
Full results: 2012 VertFest results 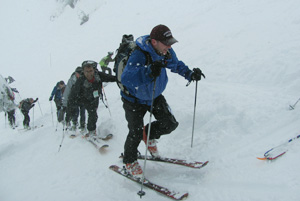 The Outdoor Research VertFest skimo race held at Alpental, Washington last Saturday drew in about 160 people! With snow at our face we lined up in rows of four, and began the untracked ascent with roughly half a meter of fresh snow for a few hundred meters.
I started off in the second row, unfortunately after a few glides my ski fell off leaving me to be the leftover of the herd. Then I managed to put myself somewhere in the middle of the crowd where I remained too comfortably for the entire duration of the ascent.
Soon after the frantic start run the race merged to a single track which I found to be too soon, not allowing the crowd to spread out gradually. We would actually stop as people worked at their switchbacks and transitions.
Footholds for the boot pack’s held well and I did not find any trouble with it, except for the fear that skis carried on the shoulders of some skiers would fall on me. There were double tracks at times to pass but not enough if you are within the crowd for you would have to merge back in again.
The downhill was better, not nearly as crowded but a bit tricky. Wind blew the snow off the moguls exposing ice on one side and leaving a meter of snow on other, but mostly great conditions. On the descent, the flagging was clear enough and the cheery volunteers were directing us on the hard turns.
The race was great overall but I need much more deep snow skiing practice and aggressiveness to budge through the crowd 😉
It was a great experience and I enjoyed this race a lot. Now, I want to come back with a lesson learned – You gotta give it all you got at the start to not be able to pose for pictures.
Photos are published with a permission from Martin Carnogursky, a junior skimo racer himself.