There was a historical turnout at the Vert 180 race in Calgary last Saturday with around 100 participants competing in solo and various relay categories. This is a great sign of future development of skimo in Canada, especially given the number of athletes that were on light racing gear – new local store SkiUphill provided a couple of light & fast demo setups as well.
The race course was non-technical, featuring a 140m climb ending with a boot-pack section, followed by a fast descent. The goal was to do as many laps as possible in 3h.


The win in the men’s solo category went to Peter Knight who was the strongest and completed 18 laps for a total of 2520 m. Second went to a local skimo “novice”, Tyson Smith, who has built his engine through years of cross-country racing. Third place belonged to Vert 180 co-organizer Travis Brown. All top 3 solo men completed full 18 laps but finished a couple of minutes apart.
Women’s solo race was more predictable as Kylee Ohler (Vert 180 founder) has confirmed once again that she is a truly dominant force in the Canadian racing scene over the last two seasons. Kylee completed 17 laps for a total of 2380 m. Second place went to Marg Fedyna (14 laps) and third to Heather Anderson (13 laps).
For junior categories, 2-person and 4-person relay results see the link below.
» Vert 180 – 2017 full results

Most dedicated mountain athletes in the western US and Canada have heard of the Methow Valley: a small cluster of towns nestled into the eastern slopes of the North Cascades featuring a reliable snowpack and ample front- and backcountry terrain for excellent touring. Now there’s another reason for endurance athletes and racers to pay attention to the Methow: the Loup Loup Randonee Race. 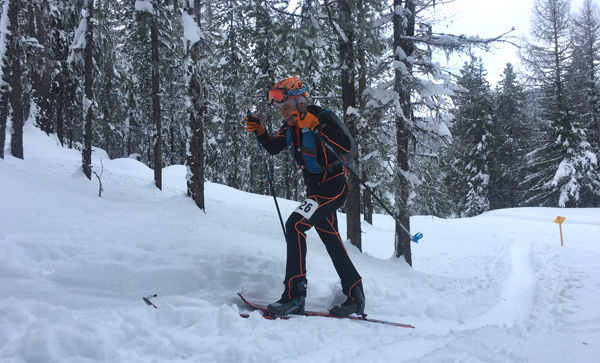 The Loup race is hosted by Cascade Endurance, a coaching and events business run by Methow athlete/coaches Sam and Alison Naney. The Loup course features a 1300’ vertical gain on a forested up-track and a straightforward blue-run descent, making the race a straight-up endurance challenge with low technical barrier-of-entry for newcomers. Last year’s race offered a one, two, or three lap option and saw about thirty competitors toe the line for the inaugural year.
This season’s race, scheduled for January 27th, promises more fun, greater challenge and good beer. In addition to the standard 1/2/3 lap individual events there will also be a 10,000 ft (8 lap) challenge for individuals and 3-person relay teams. The local Old Schoolhouse Brewery will be hosting a pre-race party and ski film showing at their Twisp-area taproom on Friday night, and on race day there will be food and beer aplenty for finishers (and lappers?) at the start/finish area.
If you’re looking for an opportunity to check out this beautiful mountain paradise and get in a solid race effort without trekking to the Rockies, you should definitely consider the Loup Rando races.