Skimo racing season is wrapping up around the World. The Canadian Cup is complete and the final World Cup was contested over the weekend. Just a few races remain to be held in the US including a postponed Irwin Guides event, and several events in the Sierras.
Most skiers in the Pacific North West and Rockies are turning their eye towards big spring objectives and steep skiing while athletes in Colorado and the East Coast are already thinking about the start of their cycling and running seasons.

Max Taam was challenged by Charlie Macarthur but ultimately stayed ahead by slim two seconds while it took another five minutes for the third place finisher to complete the 2 hour course. Sarah Cookler was unchallenged for the female win and Grace Staberg finished in second. Alex Pond rounded out the men’s podium.
> Full Results

Italy continues to dominate in the final World Cup of the season on their home turf. The racing in the Italian Dolomites, at Madonna di Campiglio, was incredibly beautiful and a perfect example of why skimo is such an amazing sport.
Individual Race
Robert Antonioli sniped Michele Boscacci for the final individual win with Matteo Eydallin rounding out the Italian podium. William Bon Mardion was the lone Frenchman in the top five. There were many notable absences including Kilian Jornet after breaking his leg at Pierra Menta, and Anton Palzer citing “health reasons”. Americans Cam Smith and Rory Kelly made the trip to Europe racing to 41st and 42nd respectively.


The French had better luck in the women’s race with Laetitia Roux winning both the individual and sprint, reminding the field that she’s not ready yet to step down from the podium. Her French teammate but Pierra Menta rival, Axelle Mollaret finished almost four minutes behind with Alba DeSilvestro taking the final step on the podium.
Sprint Race
Michele Boscacci and Laetitia Roux won their categories in the sprint event. Cam Smith had a respectable finish in 31st, just out of qualifying, while Rory Kelly placed 37th.
> Full Results

This race recap was sent to us by the local organizing committee.While this event took place a month ago, it is worth including it in our report as the route and scenery are truly spectacular.
The second edition of The Arctic Triple – Lofoten Skimo was on Saturday March 10th. The race is organized in “the world’s most beautiful archipelago” – the Lofoten Islands in northern Norway, and the participants are overwhelmed by the experience. The weather was perfect and happy athletes finished what turned out to be an amazing arctic adventure.
Lofoten Skimo consists of two distances and there were both national and international participants at the first edition of the race. On the longest distance the racers cross 8 mountains tops and ridges and 4000 height meters in spectacular terrain. The shortest distance takes the athletes across 2 mountains and 1200 height meters. 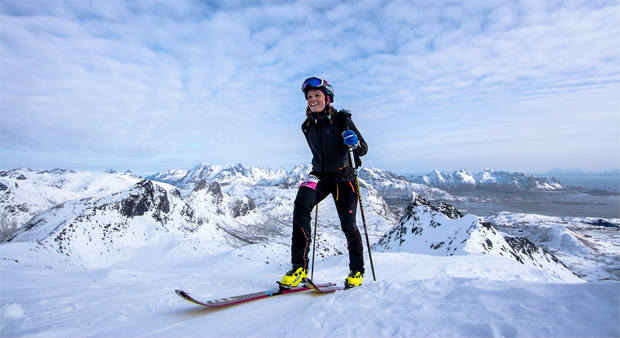 The French athletes Mathèo Jacquemoud and Lèo Viret won both distances on the men’s side, while Norwegian Kristin Brandtsegg Lome was the best female on the long distance. The shorter distance on the women side was won by Chloè Guellerin. The winner time by Matheo for the Lofoten Skimo 4000 was 5 hours and 29 minutes. Leo won the shorter distance in 1 hours and 29 minutes, which is a new course record. The winner times on the women side was 7 hours and 19 minutes and Chloe spent 2 hours and 31 minutes finishing Lofoten Skimo 1000+.
“It was a really beautiful race. The race course, the friendly crew and the amazing nature in Lofoten really blew me away.” –  Mathèo Jacquemoud, France (winner of Lofoten Skimo 4000+)
Three races – three seasons
The Arctic Triple consists of three annual races set in week 11, 22 and 33. 2018 is the second year with all three races set up and Lofoten Skimo was first out. Next comes Lofoten Ultra-Trail in week 22 and the triple year is finalized with Lofoten Triathlon in week 33.
“We think Lofoten represents a unique arena for adventure races and with our concept we offer three amazing adventures in three different seasons in the arctic. Lofoten Skimo is in the middle of the northern lights season, Lofoten Ultra-Trail in the midnight sun season and Lofoten Skimo in the beautiful late summer.” – says Director Frank Hagen.

All that remains of newsworthy events is the bi-annual Patrouille de Glaciers! We’ll be watching closely the weather to see if the Patrol will be held as several North American teams plan to contest the route. Download the PDG app to follow along with your team of choice!