In recent months I have received couple of questions about my ski mountaineering racing gear, specifically, how I lightened up over the years. To give you an idea, here are examples of the nature of those questions:

So in this post I want to share my thoughts on the need people feel about light weight ski mountaineering racing gear.  And at the same time offer advice on how they can go about their choices as they progress.

I did my first skimo race when I was about 15 years old. It was about 1500m of climbing and the whole thing was in pure backcountry. It took me well over three hours (winners were under two) and I did it on a pair of 180cm skis (about 75mm under foot and 1800g per ski). The bindings were well used legendary Silvretta 300 (about 800g per foot) and boots some kind of Dynafits. To super charge the kit I had normal ski poles, some kind of a backpack, and cycling clothing mostly.
At the time, that was my only ski touring setup and so I did everything on it. It was great, I enjoyed it very much but I sure noticed that all the folks in the front were on some weird pin based bindings which seemed very light and breakable (first Dynafits). 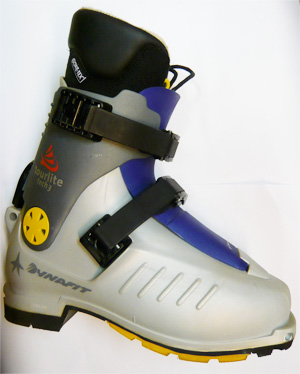 Few years later I got a brand new ski touring kit which was also much more suitable for racing. This consistent of one of the lightest boots at the time – the Dynafit TLT 3 skied like shit and was about 1500g per boot. On recommendations about durability my bindings became Dynafit TourLite Tech (later referred to as Classics) which were an astounding 340g per foot, and they were mounted on 178cm Dynastars (around 70mm wide and 1400g per ski). I placed 3rd at Slovak junior nationals on that gear.
For a comparison, the fast guys in men, junior and women categories in those times were mostly on the same boots as me but with lots of modifications. They had 165-175cm skis (about 950g per ski) mounted with either the same bindings as I or the Dynafit TLT toe piece coupled with random garage-manufactured heels (about 200g per foot).
I have ski toured and raced that same setup for couple of years until I broke the skis, in around 2004. Then I bought another pair of 178cm Dynastars but this time 65mm wide and about 1100g. Boots were Scarpa F1, and the binding was my old faithful Dynafit TLTs. At the time this was quite a light setup for the North American racing scene but I certainly wasn’t the fastest guy around. Greg Hill, Steve Romeo, Chris Kroger and others were kicking my ass by a lot.
Then for about two years I almost didn’t race at all as I was working and out of shape. However, I had my last light setup safely stored in the basement just in case.
Fast-forward to early 2008 and the “just in case” happened – I raced couple of times and organized one race, helping with others. By this time, people caught up and you could see all the front guys on short skinny skis and almost everyone was on Scarpa F1s, some even wore spandex. (This is referring to NA scene.)
I still rocked the same setup for the early 2009 season but this time with more training (and no full time job) I was able to finally get on some podiums. Then during that season I got a light pair of 164cm at 900g skis and combined the well-used Dynafit toe pieces with ATK heels, which gave me a setup of about 1100g per ski. Still on my old F1s for boots.
I continued to race that same setup over the 2010 season and did Skimo World Champs and Pierra Menta on it. By this time the Euros were racing on way lighter gear (720g skis, 115g bindings, 700g carbon boots) and North Americans on about the same weight as me.
Before the 2011 season it dawned on me that if I wanted to stay competitive not only more training was needed but the lightest gear will be an absolute must even for challenging any Canadian podium. And as the season rolled around the corner we were all on-pair with the Euros in terms of gear weight.
I ended up racing on second-hand Pierre Gignoux (fitted with my 5 years old F1 liners) and a pair of 870g skis (including bindings) till the end of 2013 season.
As of now, like many of you, I am looking for a new setup. The options are plenty but also pricey.

My advice for “racing” gear

Unless you have too much money to spare then I believe your skimo gear selection should be based on priorities and goals.
Today’s marketplace offers much better choices in terms of going light yet compromise very little in terms of gear performance. Ten years ago, if you wanted to go very light you were stuck with strictly racing gear. It was good for that but not much for anything else.
These days, you can have a 75mm ski that is even below 1kg that is great for lots of other skiing than just running up mountains.
But back to priorities and goals – let’s define some situations you might be finding yourself in right now.

I assure you you can do your first couple of races on whatever you have at the moment and still have fun and see whether it’s something you will enjoy for longer.
If you think it’s way too heavy then perhaps you can pick up a new or a used pair of Dynafit Broad Peak skis (74mm and about 1200g) or Dynafit Cho Oyu (87mm and about 1100g), TLT 5 or TLT 6 boots (1050g) and whatever tech style bindings you want. Or an equivalent of those pieces of gear.
Such a setup will allow you to have gear that is light yet much more usable for other things than just racing, such as steep or spring skiing, or occasional ski resort days. And the boots will be usable with your big skis as well.
At this stage of your development you are trying a new activity and I bet you didn’t buy a $12,000 Pinarello when you were learning to bike 😉

2) You enjoy the racing and you want to progress

It’s great to be in this position as by now you figured out you absolutely love it and want to give yourself a chance to see how much better you can be. The spoiler is that more race specific gear will help you but training really is key.
But I assume you are hooked and are keeping fit so it might be time to step up to something lighter. From what is currently on the market, I think a wise choice to start is to lighten up your boots first. That will usually also bring a better ankle movement which results in a more efficient stride.
Again, you can buy new or used from any of these two without going wrong – Dynafit PDG boots (800g) and Scarpa Alien (850g).
Whether you get a pair of any of the two or you are happy with your current boots you should take a look at some lighter skis. Good choices will be anything around 800-1000g in just over 160cm for men and 150cm for women (due to ISMF rules on lengths). Some great options that will do for anything fast are:

For bindings, you can go lighter than say Dynafit TLT Speed Radical (340g per foot) but then you are looking at investing in racing specific bindings for quite a bit more money.

If you belong to this category, whether through years of progress in skimo or coming from outside, then I advise you take a look at Skintrack’s lightest gear comparison pages. Here they are:

You will need the combination of all three to be as light as possible to have a chance for a podium at most North American rando races.

What is the gear you have and what are your goals?

If you are having hard time to figure out your setup based on your goals and priorities drop me a line in comments below and I will try to navigate you towards the best option. Or anyone feel free to ask anything regarding this topic.