I like to learn from people and about people because we are all unique characters. With some we have lots in common, with others only few things. But there is always something to learn. 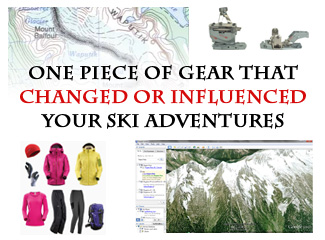 So I had an idea – let’s ask couple of interesting people 3 simple questions and see what comes out of it.
Since answers came in longer and deeper than expected I decided to spread them over three articles than jam everything together.
» To read answers, from the same people, to the 2nd question of the Game Changers series see – The person that influenced or changed your ski adventures.

I reached out to couple of people that would represent the ski touring pool in every aspect – from exploring, adventurous skiing, to rando ski mountaineering racing:
Greg Hill – the 2 Million Man trail breaking machine, Dynafit Stoke ski features his name
(http://www.greghill.ca)
Melanie Bernier – 5th at World Ski Mountaineering Champs 2011, triple Canadian Skimo Champ, also very successful MTB rider
(http://inthetrails.blogspot.ca)
John Baldwin – Canadian West Coast ski mountaineering explorer and author of “Exploring the Coast Mountains on Skis”
(http://www.johnbaldwin.ca)
Christina Lusti – 2006 alpine Olympic skier metamorphosed into a backcountry skier and ACMG Assistant Ski Guide
(http://christinalusti.wordpress.com)
Stano Faban – this is me. I wanted 5 people to answer these and since I couldn’t get hold of Andrew McLean I humbly decided to take his place. Hopefully, I can fill in his answers later.

1st question: What is the one piece of gear that changed or influenced your ski adventures (whether that be touring or racing)?

Before you dive in, I want ask you to share the piece of gear that changed YOUR ski adventures. You can do so via comments section at the end of this article. It is always interesting to see what influences others.
Greg Hill says:
Google Earth changed the way I approach adventures! It increased the amount of terrain I could explore from home, which expanded what I could do out in the mountains.
I remember the moment I started using Google Earth, in 2006, it was getting information for the Bugs Rogers traverse [Bugaboos to Rogers Pass]. We were planning on doing some variations from thee normal route and we spotted this 4500 foot avalanche path into the Duncan creek. Weeks later when we rolled into the line it looked exactly like on Google Earth, and we skied it top to bottom completely relaxed, knowing the line was cliff free to the valley bottom.
Up until that moment all our information came from maps – vague 100 foot contours hinting at the terrain that was out there. Huge cliffs could hide in the middle of lines, a line pondered and penciled in at home could turn out to be un-skiable.
It was harder to truly daydream a line, you could see the potential but there was always a huge amount of unknown. With Google Earth you can view lines from all angles, tilt them and look down them. Check out approach, spot hazards from home and then go out with so much more information.
You can spot a line from 100 km away, go home and view it close up, mark it “Cool Peak”. Dream about it for a few months and then go and ski it, feeling like you have already been there.  It’s unbelievable!
Melanie Bernier says:
Ski touring bindings.
Growing up, there was a cross-country trail just across the street from my parent’s house. Getting lost in the forest with our cross-country skis was what we would do after school.
At 8, I put the free heal equipment aside when I discovered a new passion for downhill skiing.  After learning the skills and racing moguls for years, I would have never thought this amazing sport could get any better until the day I moved to the West Coast and discovered touring bindings.
The purchase of my first pair changed my perspective forever. It totally made sense tying in the cross-country skiing roots, which were still present in my heart and the ever-growing passion of downhill skiing. It offered not only a way to fulfill my desire for exploring beyond the boundaries but also the love for carving turns in the white fluffy stuff.
It allows for freedom of the destination, the length of the journey and the type experience. In a rando ski mountaineering racing perspective, the type of binding and their evolving technology allows now not only to discover new terrain but also cover the distance with speed and confidence.
As simple as it sounds, the piece of equipment that charged my perspective in ski touring and racing is the piece that rests between my boots and my ski.
John Baldwin says:
Stano, that’s a tough question. I’ve been skiing for 40 years and have used a lot of different equipment over the years.
I don’t feel that old but I do remember leather downhill ski boots, jackets that had cotton in them before there was Gore-tex, clip on skins, and sat phones and GPS hadn’t been invented.  Most of the gear we use has generally gotten way better and we have some pretty amazing gear nowadays. As a package all of it has influenced my ski adventures.
To single out one piece of gear is hard! But if I had to pick one thing I think it would be maps.
I started backcountry skiing in the 1970s. Back then there was no Coquihalla Highway (BC, Canada), no winter access to Duffey Lake (BC, Canada), and far fewer logging roads. There were areas that didn’t have 1:50,000 scale maps. Many of the detailed maps of the Coast Mountains were not completed until the mid 1970s.
I remember going on a trip to the Manatee Range in 1979. Hardly anyone had ever gone in there skiing. Access was from logging roads that were still under construction. What really influenced my ski adventures was the map that we had. It was a new 1:50,000 scale map of the area.
Half of the map showed the Lillooet Icefield which is just north of the Manatee Range. I remember staring at the map. It showed huge glaciers and I was so curious to see what those large blue areas on the map looked like. In a way it was that map that got me started on going to all these wild incredible places in the Coast Mountains.
Christina Lusti says:
All of my amazing Arcteryx clothing!
I love spending as many days skiing as I can. . . So being suited with Arcteryx’s finest makes my days in the mountains comfortable.
Stano says:
As John pointed out, it is difficult to single out one piece of gear and I definitely agree with any of the choices above. But I wanted only one, so here is mine.
The game changers for me were a pair of Dynafit Classic bindings. I think it was in the winter of 1999/2000 when Peter Svatojansky (an upcoming top Euro skimo racer at the time) recommended that I switch from Silvretta to Dynafit even though I was not seriously racing skimo back then. To this day I am grateful my father spend the money to let me have a pair of quite light Dynastar skis mounted with the Classics.
These bindings have not only let me enjoy mountains more and feel less sore for next day’s triathlon workouts but they showed me that if you buy a quality product you never have to buy again. To this day I remount them from skis to skis. They are 12 seasons old and I never serviced them once!

Next question: Who is the one person that changed or influenced your ski adventures (whether that be touring or racing)?

To read answers to the 2nd question of the Game Changers series see – The person that influenced or changed your ski adventures.
» Signup for our newsletter (top right of this page) or follow us on Twitter and will let you know when any new article is up.

What piece of gear was your game changer?

Share what was The piece of gear that changed your ski adventures, be it backcountry or racing.
And thank you for enjoying the read!