With the new winter approaching, we have talked to SkiTrab about their upcoming new pairs of skis in the 75 to 85 mm range that are based on the famed Magico 2 and Maestro 2 models, but at a substantially lower price points.

SkiTrab has been around for close to 8 decades and in the recent years has prided itself with a 14-layer technology that allows them to tweak the performance while keeping weight down and durability high.

To make their skis light yet stiff, SkiTrab uses Aramid-honeycomb core which is used in aerospace and military applications as it provides a superb strength/lightweight ratio. However, this structure also increases the price of the final product.

For the new winter season, SkiTrab has created 3 models based on the Magico and Maestro platforms as it replaced the Aramid core with light wood. While this change has sightly increased the skis’ weight it has also made for a softer and a more forgiving ride. And the prices are much lower.

With the same dimensions as the Magico 2 skis the Ortles shaves around $250 off the price and adds only about 30g.

This ski is still build for demanding skiers yet offers a smoother ride as it absorbs shocks better, and also performs slightly better in softer snow than the stiffer Magico, but that depends on riders style and weight.

The weight has increased by about 120g for both the Stelvio76 and Stelvio85 compared to the Maestro and Magico models. But again, the price is much lower, about $350 less.

SkiTrab refers to these models as the softer version of the Stelvio models, featuring more flex, and recommends them for lighter skiers (or beginner to intermediate). Also, women might prefer these skis over the Stelvio line.

The weights are slightly lower than for the Stelvio models and price stays about the same. 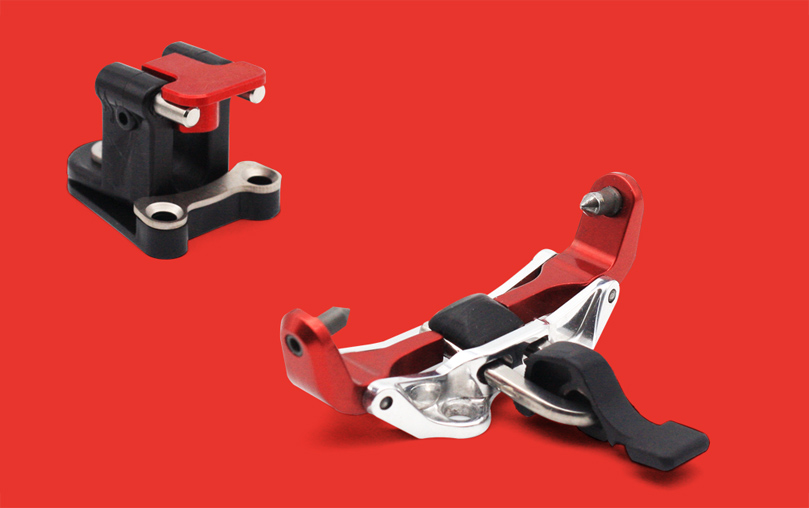 When the brand of Pierre Gignoux comes to mind, most ski mountaineers immediately think of the company’s famous carbon fiber boots.

However, the company continues its innovative approach to product design with a new binding, the U 77. With this binding, Pierre Gignoux (PG) is now making the lightest traditional low tech binding available on the market.

In recent years, Ski Trab has been developing category leading race style bindings. To reduce weight, Ski Trab did a complete redesign of the traditionally spring equipped toe piece. Instead of using springs to achieve the tension in the toe, Ski Trab used a single piece of Titanium that folded underneath the toe lever.

Now, Pierre Gignoux has taken that a step further in weight reduction, and used the same Titanium bar style, but placed it under the wings of the toe piece and reduced its size. This refinement of the titanium bar style toe piece has now brought traditional low tech bindings within 15 grams of PG’s one piece toe, the Ultimate 3.

The heel piece is expectedly diminutive in size, using the now common base plate and rotating heel plate built of plastic. The heel piece is identical to PG’s other binding, the Ultimate 3. Pierre Gignoux states that the design is built to release around DIN 6, same as most other skimo racing specific bindings.

For racing at the highest levels, PG has always brought innovative products to market, and the U 77 is no different in this respect. However, Mr. Gignoux has also shown advantages of using his products also for adventures such as big ski traverses of as shown below.