Despite being one of the most spectacular places in the Sea-to-Sky corridor (between Vancouver and Whistler, BC, Canada), Tantalus Provincial Park is one of the least well traveled. This is partially due to problematic access – the vast majority of users use helicopter – and partially due to the difficulty of the terrain. 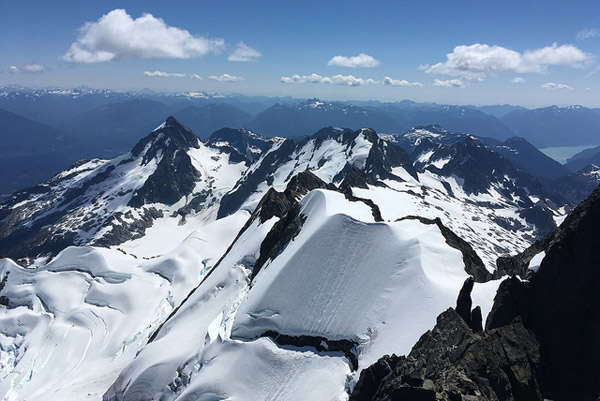 Over many trips into the area, I’ve become more familiar with the terrain throughout the Tantalus Range. Single routes no longer seem as daunting of an effort and the appeal of the area is no longer just getting there and doing something, but trying to string chains of routes to maximize the time in the alpine and technical terrain covered.

In 2016, Nick and I had our eyes on the Tantalus Traverse. This route starts at the north end of the range (at the Sigurd Creek trailhead) and climbs over the shoulder of Pelion Mountain before ascending the North Ridge of Tantalus (a classic climb in south-west BC) and then descending to the south past the Haberl Hut, and down past Lake Lovely Water to the Squamish River. All said and done, we traversed Mount Tantalus from car-to-car in just under 11.5hrs.
While the trip was an incredible adventure and a proud accomplishment, it was hard to shake the feeling that we had run past a lot of summits that we really should have tagged. As Peter Croft says: “summits do matter!”, and almost immediately the seed was planted. What if we followed the same route but tagged as many summits as possible along the way? There’s no shortage as more than 16 named peaks lie in the vicinity of the park.

Fast forward a few years of practice scrambling and climbing in the mountains and the “complete” Tantalus Traverse was still on my mind.
The Arcteryx Alpine Academy comes to Squamish every summer and with it, an influx of some of Canada’s raddest athletes. I’ve known of Greg Hill for his reputation as a skier for some time. In 2013, Nick and I broke his long standing record skiing around the Spearhead Traverse. This season was the first time we’ve actually crossed paths in person though. After an introduction from Adam Campbell and the assurance from local guide stud Ross Berg that snow conditions were still optimal, we decided to give it a go.
With the hope that we could do the whole traverse in less than 20hrs, we debated start times but settled on a “reasonable” alpine start of 2:30am. After stumbling through a backcountry rave being held at the trailhead, we were off up the Sigurd Creek Trail by headlamp. After climbing up northern slopes on Pelion, we emerged from the tree-line and started climbing open moraine, slabs, and glaciers. The first amazing view comes crossing the East Shoulder of Pelion. After a 2000m ascent, you get to see the full Tantalus Traverse laid out in front of you. It’s inspiring and daunting at the same time – there’s a lot left! 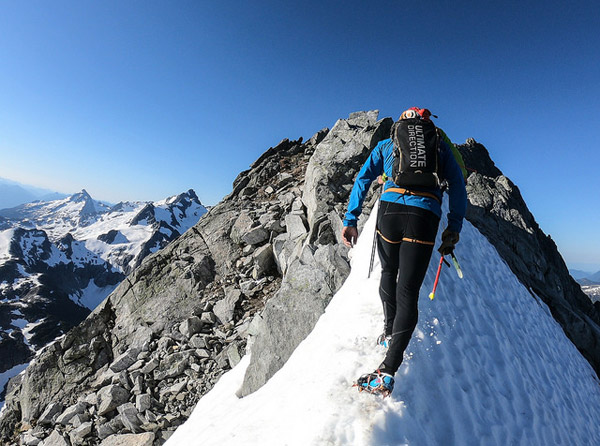 We scrambled a loose gully to gain snow slopes on the north side of Pelion up a beautiful crest to the summit. Descending back to the shoulder, we regained the standard route and crossed down towards the Tantalus-Zenith Col. After saying a brief hello to a heavily laden group doing a multi-day trip in reverse, we continued towards Tantalus.
The North Ridge presents some glacial difficulties but then gives way to excellent alpine scrambling on a sidewalk in the sky. Views are incredible down the steep Rumbling Glacier with Squamish and Howe Sound to the south, the Ashlu-Elaho Divide to the north, and the Sunshine Coast to the west. We romped along up the ridge and tackled the final 3rd class pitch that leads to the summit slopes. The sub-summit and final scramble to the peak are some of the most engaging and exciting climbing on the route.
With our second summit under our belts and generally feeling pretty good, we started the most complex portion of the day, descending off Tantalus. Luckily, having guided it many times, Ross’ experience here was invaluable for quickly locating the four rappel stations and moving as efficiently as possible. Despite taking our time, we quickly found ourselves back on snow and then it was just a short out and back scramble to summit three – Dione. 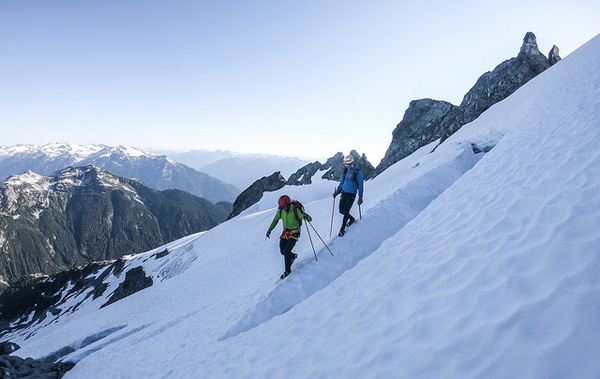 Low on water, we moved as quickly as we could down the roasting hot Dione Glacier towards the Haberl Hut. We gulped as much water as we could at the first melt-water stream we crossed, and then stopped at the hut to quickly boil some instant noodles. The salt was incredible and gave us a much needed boost.
The West Rib of Serratus was one of the few sections of the day I hadn’t actually previously done. It’s pleasant 4th class scrambling on good rock. We’d already spent so much of the day on that type of terrain, however, that we just hoped we could get through it quickly. Soon enough we were on the summit, polishing off the remains of our food with only Alpha remaining to the East.
The North Face of Serratus is a classic steep ski descent but had softened up nicely in the afternoon sun so we made quick work of it, boot skiing down to the lower glacier with just a few crevasses to avoid. From here, we had to drop surprisingly far down to gain the Serratus-Alpha Col. With the feeling that the day was in the bag, we plodded up the West Face of Alpha (3rd class) in what was the hottest and most unpleasant climb of the day. 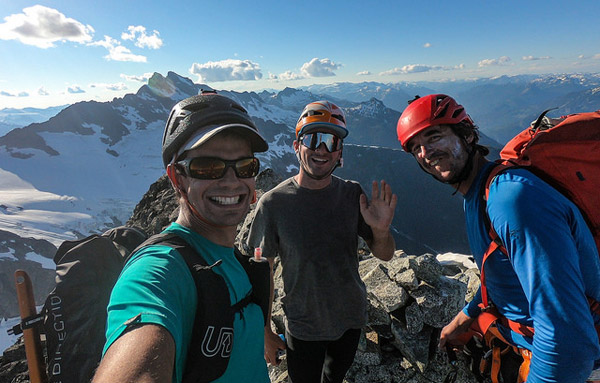 Luckily the unpleasantness of climbing Alpha was completely washed away by the psych that we felt on reaching the summit. We had accomplished our goal of five peaks and were on track to get back to the river before dark if we moved quickly. It’s all downhill from here! We made quick work of descending the East Ridge of Alpha and nailed the route back to Lake Lovely Water. It’s poorly marked and often not much of a footbed so we were a little nervous we could get off track there. From the Lake, the trail down is good (compared to the rest of the day) and we put our heads down and pushed hard to get to the river. Fatigue was showing and we each had several wipe-outs.
We put on headlamps just as we arrived at the Squamish River cable car station and stopped our watches after about 18hrs of mountain travel. All that remained was to cross the river and walk a few short km to our car. Unfortunately, this was what we were worried would be the crux of the day. With the cable car itself locked up on the far side of the river, our options were swimming, which seemed needlessly dangerous, or tightrope walking on the haul cable while clipped in to the upper cable above our heads, via ferrata style. Greg launched off first so he could get a head start on the trip back to the car so Ross and I sat on the near station and cheered him on (heckled). The upper cable that you clip your tethers to has four metal cones anchored to it for aircraft visibility. They require that you kind of push around them after clipping past but we’d heard recent reports that several of the cone had wasp nests in them so we were pretty nervous. We were wearing all our rain clothing in the hopes it would protect us from bites. 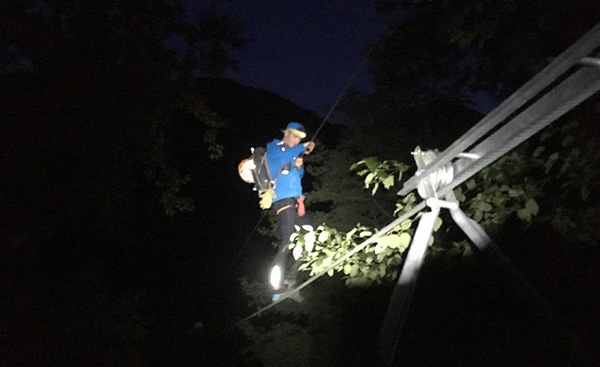 When Greg passed the first cone, we held our breath, hoping there wouldn’t be any wasps. He made it past without any bites but not without losing his balance and bowing way out towards the river with his feet on the lower cable. After that, he got in a rhythm and pretty quickly, it was my turn. I got clipped in and started walking. There may have been some whimpering and self doubt but Ross reminded me that there was no other option so I’d better get on with it! Soon enough, I found my rhythm as well and before I knew it, I was back on terra-firma waiting for Ross.
While it will be a few weeks before I really feel like I need to deal with crossing that river again, I still have unfinished projects in the Tantalus Range. I know it won’t be that long before I’m back.
A big thanks to Greg and Ross for prodding me to join them for the day. It was a great crew and we had a really good time!

I used Scarpa Iguana approach shoes for this trip. They were really good for climbing and decent to run in, but terrible on snow (as they are not built for that). Even with crampons that fit (Petzl Leopard), they aren’t very stiff so being comfortable climbing steep snow is important.
The new Ultimate Direction SCRAM pack is going to be awesome. It’s designed with this exact type of trip in mind. Stay tuned.
Because we only anticipated making rappels (4 x 30m on Tantalus and 2 x 30m on Alpha), we brought skinny ropes. The Petzl RAD Line is awesome for ski mountaineering and rappelling but using such skinny cord on rock is a bit disconcerting. It’s important to ensure that the ropes are running correctly over the rock edges and that they won’t roll along the edge as you move along the rappel, causing damage.

The Tantalus Traverse and many of the peaks we tagged are described in the book Alpine Select by Kevin McLane. This is firmly alpine climbing territory and shouldn’t be considered running. GPS tracks can be found online and are helpful for some of the macro-route finding. Micro-route finding is also a challenge (especially sections like the descent off Tantalus but even the shortest route through the Zenith Col or down to the Russian Army Camp) so being able to assess and move efficiently is key.
I wouldn’t recommend the full traverse without getting some shorter trips in the range first and obviously having the right combination of skills.