I like to mix mountain adventures with cultural experiences and so without too much planning and speaking only few Spanish words was enough to inspire me for a trip to Mexico in early November last year.

The highlight was going to be the whole trip but I needed a specific excuse… Pico de Orizaba (Citlaltépetl), a 5636m volcano, seemed good enough.

With flights booked only ten days apart, I was slightly nervous if my wish list wasn’t too ambitious – visit Mexico City and Puebla, climb two volcanoes, and hopefully manage it all by normal bus transportation.

While as a third highest mountain in North America, after Denali in Alaska and Mount Logan in Yukon, it doesn’t present a technically difficult challenge it’s still high enough to not be underestimated. Eventually, I was lured to Orizaba by flying over on Google Earth and realizing an adventurous traverse of this peak might be possible.

Itinerary and Logistics: If you want to learn only facts about my itinerary and logistics then scroll past all story below until you reach a section titled “Transportation, Accommodation, Food, My Itinerary, Acclimatization”.

If I wanted to traverse Pico de Orizaba it meant that I would have to carry everything I would bring to Mexico over the tall volcano, plus, water for two days as there is none on the mountain.

I forgot to weigh it but I think I left the house with about 14kg on my back. This included the 60L backpacking pack, thin $50 sleeping bag, mountaineering boots, light crampons and axe, and some old clothes so I wouldn’t stand out too much… if at all possible being about 20 cm (or half-foot) taller than most Mexicans.

After arriving from Whistler, BC, the plan of climbing a 5600m mountain in a couple of days was the biggest physical challenge of the trip as my body had to adjust to the 5000m difference quickly. The good thing is that Mexico City sits at 2200m in the Central Mexican Plateau, high enough to start acclimatizing immediately, yet not too high to suffer any dangerous altitude side effects.

With Pico de Orizaba about 6h bus ride east of Mexico City, the perfect mountain for acclimatization, in my mind, was La Malinche volcano at 4461m and located about half way.

I ascended the volcano, also known as Matlalcueye or Malintzin, on the third day and loosely wandered above the 4000m mark for a couple of hours to help with acclimatization. I slept in a rental tent in a dead empty campground at Resort IMSS Malinzti (Centro Vacacional IMSS Malintzi). Starting there, at 3000m, I reached the summit in about 3h.

Visiting Tlaxcala and Staying With Locals in Huamantla

Maybe because of the summit fog, La Malinche didn’t capture my senses as much as the town of Tlaxcala the day before. Tlaxcala is the capital of the Tlaxcala state, the smallest in Mexico, and features many beautiful historical sites within a small area. Eating tacos from food stands with locals at a central park is another highlight as it offers a much cozier feel than in the big cities.

With my weak Spanish, I was unable to find a bus in Tlaxcala that would get me to the foot of La Malinche so I bet my chips on striking a deal with a young local taxi driver, Victor. Common musical tastes and Google Translate app made the one hour drive pass quickly. We also made a fast stop to drink pulque, an alcoholic drink made from fermented sap of agave plant and a local specialty for millennia.

Our friendship continued the next day and Victor picked me up after I came down from La Malinche and we headed off to Huamantla. This small town is one of only two that are known for a festival called La Noche Que Nadie Durme , or ” the night when no one sleeps”, occurring every August 14th, during which several kilometres of its streets are covered with colourful carpets made of painted saw dust flowers and other materials.

The next day, I hopped on a bus to Puebla as there is no meaningful bus connection between Huamantla and Tlachichuca, the last proper village before one departs for Orizaba.

In Tlachichuca, I had the privilege to stay at Servimont, a hostel type of place but designed as an amazing museum that breaths mountaineering history and tells the story of a century old soap factory rebuilt as a mountain lodge. 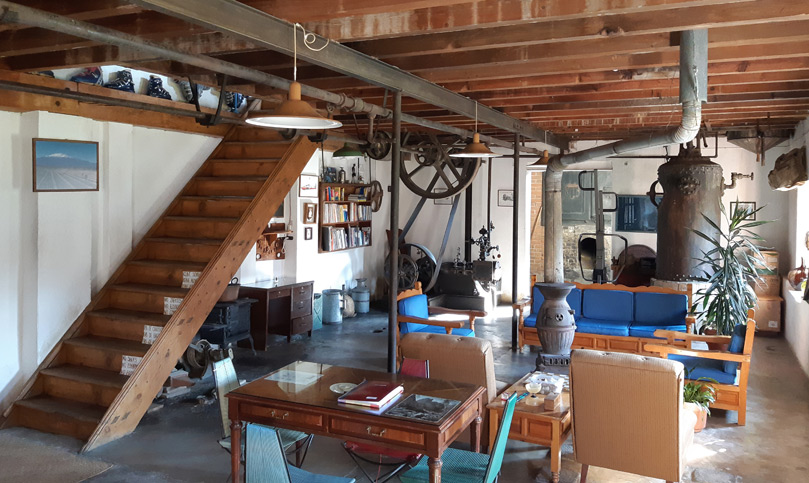 The owner and a former local mountain guide, Gerardo Reyes, and his staff were very friendly. He was somewhat skeptical about my idea to traverse Orizaba alone as its south side is basically one big rolling stones scree. I knew it could be dangerous but I also thought it’s probably not worse than on any peak in the Canadian Rocky Mountains.

The next day, I caught a ride with Servimont’s driver up to a hut Refugio Piedra Grande that sits at 4200m on the north side of Orizaba. My plan was to hike up to about 4900m for further acclimatization, and drop some gear and food so I wouldn’t have to carry it all when I start the traverse.

On my way up, I noticed there was a rescue going on as three climbers fell down the Jamapa Glacier. Two were in fairly good condition but the third one suffered a broken femur and pelvis. Shortly after I dropped my things I ran into four people carrying the victim. Naturally, I offered my help. For the next 6h we took turns on loose rocky trails, and well into the dark, carrying the person down to the hut.

The rescue was a good reminder that in Mexico you can’t rely on a swift helicopter rescue, pretty much like in Canada, and so the local mountain guides are usually the ones that end up on these heroic missions, even if it doesn’t involve their own clients. The same day, another climber died on the south side after being hit with a falling rock.

After the rescue, I decided to postpone my attempt by a day as there was no way I would wake up at 3am and go back up again. The food was running short so I thought twice before eating something.

I departed at 3.30am the next night along with other two people. We made good progress and reached the summit easily by 9am. I was told that most parties usually take about 7-8h.

On the way up, to my surprise, when picking up the food at the base of the glacier, two smiling mice ran out of my food bag! As that was all the food I had I was biting carefully around the mice teeth marks as the sunrise was unraveling.

The Jamapa Glacier was very firm so crampons and ice axe came handy. We didn’t rope up between the three of us as we were all planning to climb solo, and obviously no one brought a rope. As for crevasses, I saw one decent size hole about 100m below the summit. If you can see and follow the guides’ path you should be fine, however, you are definitely on a glacier so make your own judgement about not roping up.

Once rolling down the dry south side scree I made a quick descent to Refugio Fausto Gonzalez at 4600m, reaching it just before noon. My original plan was to spend one night there, however, after seeing and smelling the inside I couldn’t help but run away. 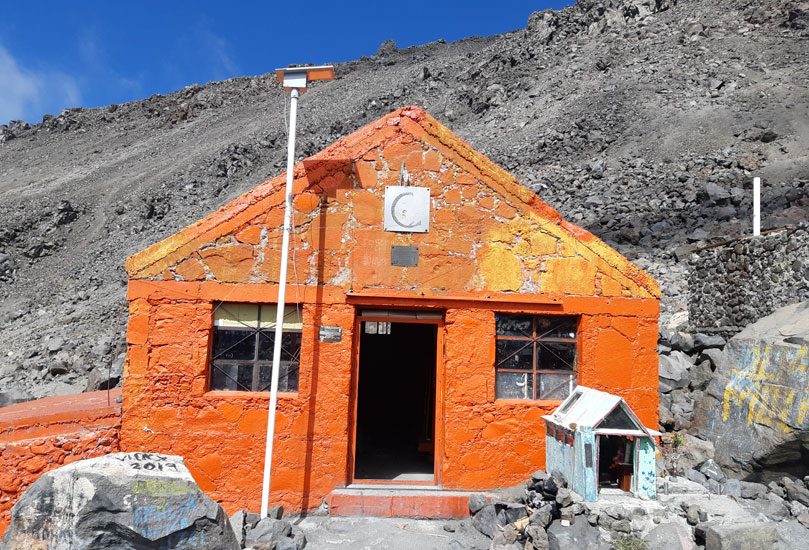 Surprisingly, the south side of the mountain was very quiet and I didn’t meet anyone on my 20km walk until I reached the nearest town of Santa Cruz Texmalaquilla.

In the little town, thanks to my weak Spanish, I befriended a local school janitor who took me under his wing when I pestered him with questions about buses, after I spotted him sweeping the classroom floor through wide open doors. Half hour later, we walked down the village together while he thought me Spanish words for all animals alongside of the road before we caught a taxi…

My next destination was the Puebla city after my new friend put me on small bus called “directivo” on the outskirts of Esperanza. We arrived in about one hour and I was plunged into an evening busyness of civilization.

Puebla is incredible and a must visit for anyone attempting Pico de Orizaba. In fact, I happily decided to stay and explore for almost two days as I somehow managed to end up with an extra day in my fast itinerary.

I spent my last day before an early morning flight exploring Mexico City, another worthwhile destination with miles of historical sites and the most museums in the world.

Here are some useful information to help you with your travels in case you were inspired by my trip.

My Itinerary by Day:

While I also brought a light harness, few carabiners, slings and some other gear, I am only listing what got used: