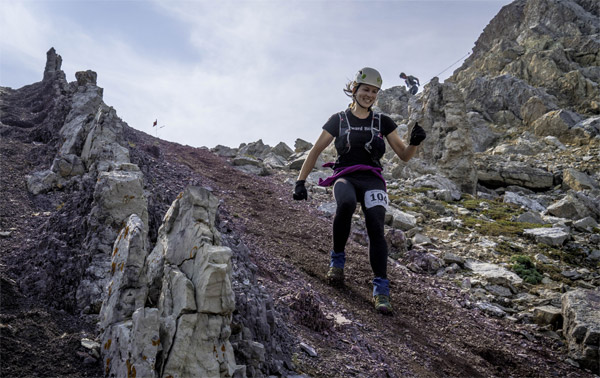 For several years now, I’ve made the trek down to southwest Alberta to race the Castle Mountain Skimo Race but I’ve never been to that part of the Rocky Mountains in the summer.
Of course I’ve heard about the (in)famous Sinister 7 Ultra that takes place in Crowsnest Pass but never thought of it as much of a running destination until a very enthusiastic Noah Schuh described the coolest race he’d ever done – Meet the Minotaur. I decided to sign up and see what it was all about, plus I’d get to take a quick stop in Roger’s Pass en route!
This race report was written by Eric. Full results are at the bottom.

Race day approached and pre-race emails started to roll in with vague warnings of dangers on the course and required equipment including a helmet, gloves, and bear spray. I was a little skeptical that this might all be a bit of an overreaction.
En-rouote to Crowsnest Pass I met Matt Ruta in Roger’s Pass and we went for a pleasant climb up Mt. Tupper. Rumors of scary soloing were overblown and we had an excellent day, though, a 5hr mountain run isn’t exactly an ideal race taper activity.

Meet the Minotaur (their website) very much resembles a skimo race in that we covered ~2100m+ over 17km, mainly in three major ascents and descents. There was essentially no flat running and just a few undulating ridge sections.

I’d highly recommend this event to any runner or skimo racer who truly loves moving fast in technical, mountainous terrain.

Race morning came quickly and I headed to the start location just outside town. The 10am start was particularly civilized and allowed the temps to warm up a bit before we had to take our jackets off to get going. 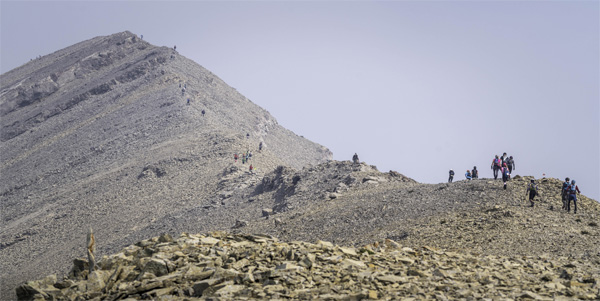 With 150 athletes on the starting line, it wasn’t quite the backwoods event I was expecting. It’s definitely not an obstacle course race and while staying on course is a concern, navigation is not a major component of the race.
While the course was kept secret prior to the race, no maps were necessary and it was well marked. The organizers had their systems dialed and everything from the bib-pickup and check-in to the pre-race meeting was smooth and efficient.
As usual, a handful of racers pushed hard off the start and faded. I found myself leading for a moment before another racer surged ahead. I latched on, not realizing at first that I was following Troy Misseghers, local hero and champion of the inaugural event in 2017. We ground up the first ascent together, realizing that we’d opened a sizeable gap on the chasing athletes. 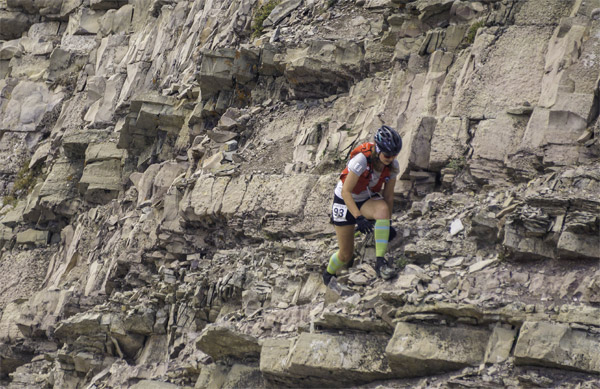 As we rolled over the top of the first climb, we dropped down to a checkpoint station and then down the first scree descent. Troy took off hard down the slope while I held back a bit to be cautious. It was just that terrible kind of scree where the rocks were big enough you couldn’t just surf them and had to be careful of getting bitten in the ankle but not big enough to trust that they’d stay in place when you jumped on them.
I made the time up again on the next ascent so Troy and I cruised across the ridge together. This had the majority of the scrambling terrain on the course with a few exposed ridge crests and some up and down climbing of rock steps equipped with ropes. 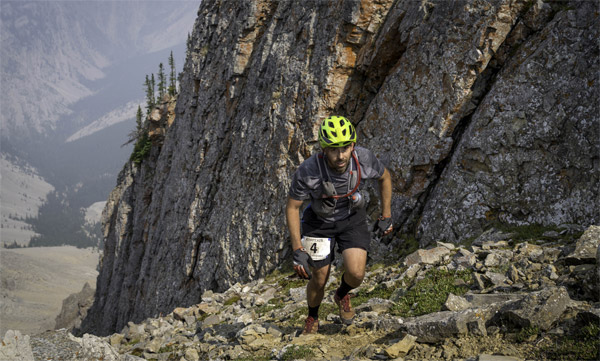 There was consistently stone fall as we moved together. Even two relatively experienced guys moving carefully, we dislodged some rocks. I can imagine it was considerably worse later in the field, with many people moving through these areas together. The helmets were definitely a wise decision. I was also very glad to have gloves on as per the mandatory equipment. I don’t usually wear gloves while running in the mountains in the summer but, while racing, I took 5-10 small slip and falls that would definitely have cut up my hands pretty badly.
Troy and I worked together throughout the race. The course was well marked with flags and tape. Not so well that you could turn your brain off, but not so sparse that you would ever get completely lost. While looking down at our feet, we also had to look ahead for the route. We were definitely pushing each other during our respective strong sections of the course. Troy would bravely smash ahead on the descents and I’d try to make him hurt on the climbs. 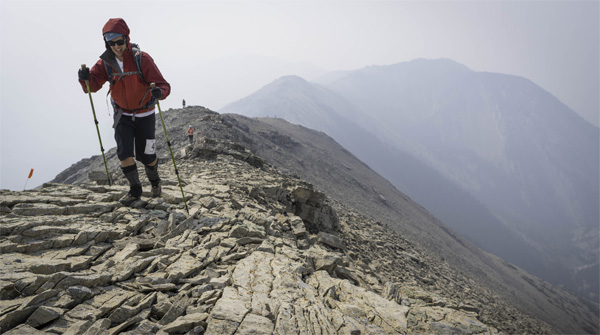 As we approached the final climb, we both expected it to be a bit longer. I pushed hard and opened up a gap. When I realized we were approaching the start/finish area, I really gave a good push and managed to roll into the finish with less than a minute to spare. Not long after, the lead woman, another local, Anna Koevoet crossed the line, dominating the women’s competition, all in preparation for racing the following weekend at Run the Rut SkyRace in Montana!
The atmosphere at the start/finish area was excellent with everyone hanging around for a taco bar and the awards presentation. Andrew, Ian, and the rest of the race organization did a fantastic job encouraging athletes to take the short course if they were on track for a long day and before long, the last few racers were finishing.
I’d highly recommend this event to any runner or skimo racer who truly loves moving fast in technical, mountainous terrain. I even left out a few of the race “twists” for you to discover next year. I’ll certainly be back!
Full results – click here