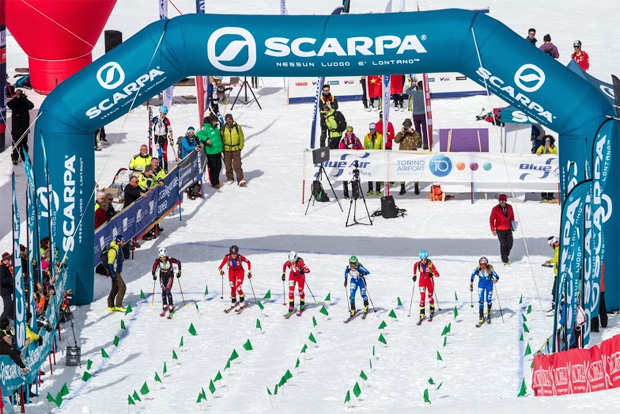 This is an official press release issued by International Ski Mountaineering Federation (ISMF) couple of weeks ago that landed in my spam box and I only found it now. It summarizes the latest positive developments of ISMF efforts in making skimo an olympic sport:
ISMF delegation will meet the Committee in Pyeongchang and attend the Asian Series to work on a showcase for 2018 Games. Meanwhile, by next summer the International federation hopes to receive the final recognition by the IOC
It is grand and it is big: it is the Olympic dream of Ski mountaineering. “Skimo people” have been chasing a common goal in recent years, committing themselves to achieve the target of entering the five circles family of the Winter Olympics Games.
Ski mountaineering is one of the few winter sports that records a growth in the last years. Numbers and statistics show an opposite and positive trend compared to other sports, not only with the number of athletes, but also with weekend fan, who approach this discipline to experience the unique emotions that only mountains can give.
Therefore, parallel to the agonistic side of ski mountaineering, the strength of ISMF, international Federation, is focused to fulfill the International Olympic Committee requirements in order to be part of the Games.
The IOC has already agreed that Ski mountaineering is an interesting discipline and in April 2014 a provisional assessment was assigned to ISMF.
A further step is expected next summer when the IOC Session will decide whether to grant the ISMF the full recognition.

The road ahead is still long – says Armando Mariotta, ISMF president – but there are many reasons why the dream could come true.

One of the most important aspect is the sustainability of this sport: the main ingredient of any ski mountaineering competition is just nature, and, as the IOC recommends, all the facilities needed on site can be removable, temporary and environmental friendly.

The disciplines we hope that will be promoted at Olympics – adds Lluis Lopez, ISMF Sport and Events vice president – are three: the Vertical, the Sprint and the Individual race.

The idea the federal board is working on, is a showcase to be organized in South Korea, during the Pyeongchang Olympics Games in February 2018.

That would be a perfect stage to show what Skimo is made of and which are the values that lay behind our way of competing”, explains Marco Mosso ISMF Marketing Vice President.

In these past three years much has been done regarding the development of the sport. First of all, the World cup has become more and more international with several events throughout Europe and many important links to other circuits all around the world.
The new web site www.ismf-ski.org has now become a reliable instrument of information. With good connections also to socials and you tube channel, the emotions of Skimo have been spread throughout the web and traditional media and press.
Furthermore, the new partnership with Infront, leader company in sport advisory, has allowed a professional step forward in marketing and communications skills.

The Swiss-Italian company will enhance our strength in promoting ski mountaineering. – adds Mariotta – They will be in charge of TV production and broadcasting highlights of many races and will also take care, on our behalf, of the media rights distribution and sponsorship in some of the venues.

Finally, next March, ISMF will be on tour in South Korea to attend the Asian series races. The delegation, including president Mariotta and Gil Orriols Jansana, technical director, will cooperate with the local organizers of the two events on stage – a Vertical and an Individual race – and they will also meet up with the Vice president of the South Korean Olympic Committee in Pyeongchang, in order to set up a master plan regarding the skimo showcase during the 2018 Winter Olympic Games.
At SkinTrack, while I think these are truly exciting developments for the sport I also believe that skimo community as a whole needs to care about what form of skimo will ultimately be featured at the Olympic Games. Here is my article from two years ago where I expressed my concerns about skimo becoming an olympic sport due to economical forces that also shaped cross-country skiing over the last decade.