With World Championships quickly approaching (Eric and Stano will be attenting as well) the athletes are entering their final preparations. Besides the west side of US, there were races happening in all corners of NA and Europe.
To read our previous Skimo News go here – Skimo News Jan 13-15: 2nd USA Team Qualifier, Mountain Attack, Upcoming Races and World Cups

We are waiting for more details from some east coast races that happened last weekend. We will update here as soon as we receive them.

With little over 5,600 feet of vertical gain, including five boot-pack segments and 25 transitions, the Berkshire East skimo race tested the local athletes once again athletes from six states – New York, New Jersey, Connecticut, Massachusetts, Vermont, and New Hampshire. (Edit as per suggestions in a comment at the bottom of the article.)
The win in the men’s category on the main course went to Ed Warren who managed to build a 4min lead by the finish line. In the women’s category the title went to Jennifer Downing.
» Full results for the competitive category 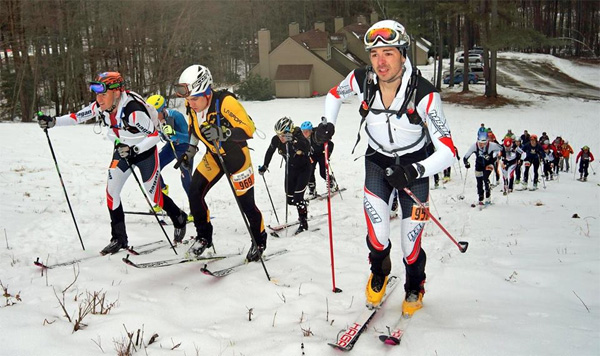 The following recap was submitted by Travis Brown, a fellow Canadian Ski Mountaineering Team teammate.
The second running of the Fernie Lizard Skinner was an exciting and hard fought battle on all fronts. The non technical course is a mix of steep groomer skinning, and flat hardpack with a distinct Nordic feel. Because all climbs involve a mix of these conditions, skin choice is key in having a fast race. 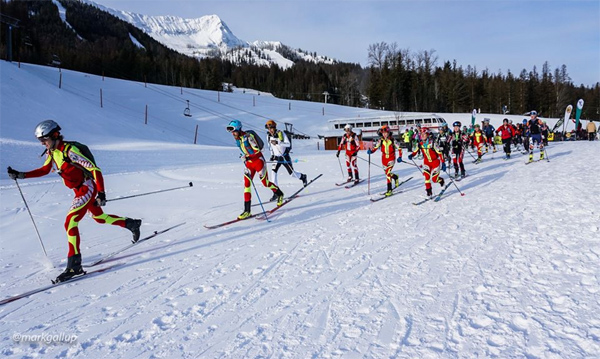 As always, in the men’s race Peter Knight took the race out hard from the gun, with Travis Brown chasing close behind. Peter built up a sizeable lead in the first third of the race, and Travis was unable to close the gap, finishing 4 minutes back. Master’s competitor Steve Sellers crashed out of the 2016 iteration of the race with a badly dislocated shoulder, but returned this year as strong as always, and managed a great 4th place finish, being passed on the last descent by eastern transplant Joel Desgreniers.
In the women’s race, Kylee Ohler was dominant from the start, building up a considerable lead over the rest of the women very early in the race. Kylee would finish 5th overall, giving Steve and Joel a run for their money. Fellow national team members Michelle Katchur-Roberts and Lori Anne Donald rounded out the podium positions.
Marcus Zamzow was the only junior racing, and came in first in the recreational category, followed by Martha Burley, a former Canadian team member returning to racing after having a baby and taking a few seasons off.
» Full results Lizard Skinner

Last weekend saw the first World Cup of the season. Like very year, the always friendly and enthusiastic Andorrans put on a show with individual on Saturday and a vertical race on Sunday.
Eric Carter toed the start line after a busy travel schedule (Colorado to home in Squamish, BC to Andorra in a span of 4 days) and not surprisingly he performed less than he wished for. However, this will serve him as a good warm up before another World Cup this weekend, and the upcoming World Championships in February. He finished 48th in the individual and 46th in the vertical.


Individual:
Anton Palzer (GER) took the win after battling Damiano Lenzi (ITA) for the entire race. The Italian even crossed the finish line in first but was awarded a penalty and moved to second. Third place went to Xavier Gachet (FRA). Kilian Jornet (SPA) finished sixth.
In the women’s race, the domination of Laetitia Roux (FRA) on the World Cup scene continued and she won without much trouble. Second went to her young French teammate Axelle Mollaret with ultra-runner Emelie Forsberg (SWE) coming in third.
Vertical:
The men’s podium completely reshuffled from the day before and with close gaps this was one hell of a competitive race. Swiss vertical specialist Werner Marti won gold by 9 seconds  in front of Kilian Jornet who was another 13 seconds ahead of, still only an espoir, Remi Bonnet (SWI). Lenzi and Palzer came in 4th and 5th respectively.
Women’s race was no less exciting! Emelie Forsberg crossed the finish line first only by 4 seconds in front of  Axelle Mollaret. Spain’s vertical specialist and mountain runner Laura Orgue claimed bronze only another 19 seconds further back. Laetitia Roux didn’t start the race.
» Full results for all Andorra races (you will need to click few links to drill down)

World Cups:
This weekend, Eric Carter will join the world elite athletes at a World Cup at Cambre d’Aze in France. Individual race goes on Saturday followed by a sprint on Sunday.
USA and Canada:
» See our preview of Steep Dreams event at Panorama Resort, BC that will take place on Feb 4-5 (individual on Saturday and vertical on Sunday).
» Check out our skimo racing calendar
Over the next two weekends you can participate in one of these:
Jan 28 – CROWBAR SkiMo race, UT
Jan 28 – Défi des montagnes, QC
Jan 29 – Skin to Win Race At Bridger Bowl, MT
Feb 3-5 – US Nationals, NM
Feb 4-5 – Panorama Steep Dreams Skimo Race, BC
Feb 5 – Burke Backcountry Adventure, VT