With more skimo events on the North American calendar this season than ever before, race packed weekends are becoming the norm! Let’s take a look how things went down last Saturday and Sunday,

Powderhorn Resort in Colorado hosted The Grand Mesa Grind as part of the COSMIC series. Joe Risi, the organizer, with the help of National Guard, set up another nice course and the racers took off on Saturday morning.
With John Gaston in Europe, one would think that Max Taam would have it easy but don’t forget this is Colorado, and so after two hours of racing the top three elite men finished within one minute! Taam did win at the end, however, always fighting Brian Smith came in only 8 seconds behind and was followed by Marshall Thomson in third, only another 40 seconds later.
In the women’s race, things weren’t any less dramatic. Jessie Young has been on fire since the begging of the season but in Mesa her winning streak got broken when Sari Anderson beat her to the line only by 12 seconds after 2.5 hours! Third place went to Sara Kadlec from Boulder who finished a bit further behind. The gap grew behind her even more significantly.

The North East Rando Race Series kicked off the skimo season in the Eastern U.S. on January 23 at Berkshire East in Western Massachusetts. Continuing the eight-year streak of no-postponements or cancellations despite a backcountry skin track entirely reliant on natural snow-entailed extensive preparation, including shoveling and snow transportation.
Jerimy Arnold collected his sixth title, fending off by only a few seconds British National Team member Daniel Gay (currently working in US).  Newcomer Peter Howe took a close third, despite having taught himself to downhill ski only this season.
Josh Flanagan came in fourth, hampered by boots borrowed from our faithful correspondent and the race organizer – Jonathan Shefftz – that were adjusted for his skinny calves and almost impossible for Josh to close into ski mode 🙂 Jonathan organized and raced as well, coming in fifth when sixth place finisher, Alex Nichols, suffered a skin failure.
This coming week, the action shifts to   Northern   Vermont   as   the   Catamount   TrailAssociation’s first-ever weeknight series starts on Wednesday at Bolton Valley, and the SkimoEast series hosts at Burke. 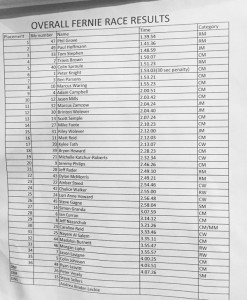 After taking a break from racing last weekend, the Canadian Skimo Series continued with a renewed skimo event in Fernie, BC. This was the original location where Stano from SkinTrack organized his first own skimo back in 2008 and 2009. Now, with locals taking more interest, the Lizard Skinner Ski Mountaineering Race was born and put skimo back on a map in the south-east corner of British Columbia again!
In the men’s race, Peter Knight took the hole shot while Adam Campbell, one of Canada’s leading trail runners, managed to loose a skin in record time. Travis Brown gave solid chase and rejoined Peter after first major climb and descent. Mike Foote, an elite US trail runner, and a skimo racing old-timer Ben Parsons chased together with a large chase group further behind. At the end, it was Travis Brown taking the win ahead of Peter Knight and Ben Parsons. Fourth went to Marcus Waring, a new name in the series, and fifth to Campbell.
In the women’s race, Kylee Toth took her first win of the season with a strong performance. Michelle Roberts came in second and was a bit disappointed about her race but there is still lots of racing left this season and plenty of time to redeem herself. Amber Steed, from Montana just like Parsons and Foote, finished third on a pair of Manaslu’s and Tlt 5’s!

Check out our big 2015/16 skimo calendar for upcoming events this week and into the future. Still most of racing left this season!