The biggest ski mountaineering race in North America for the upcoming season found its home. Kicking Horse Mountain Resort near Golden, BC will host a skimo dedicated weekend on March 16-17, 2013. 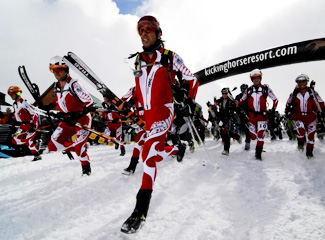 The official name for the event will likely be “The Dogtooth Dash- 2013 Continental Ski-Mo Championships” but some details are still in the works.
If you have never skied at the Kicking Horse Mountain Resort here is your chance to race over its amazing terrain that tests Canadian skimo athletes each year during the annual Canadian Ski Mountaineering National Championships.
More details will be made public in the near future. In all previous years the course was beautifully designed by Ian Gale, the angry one in the photo.
For reference, here is a short edit from the 2011 two day event: