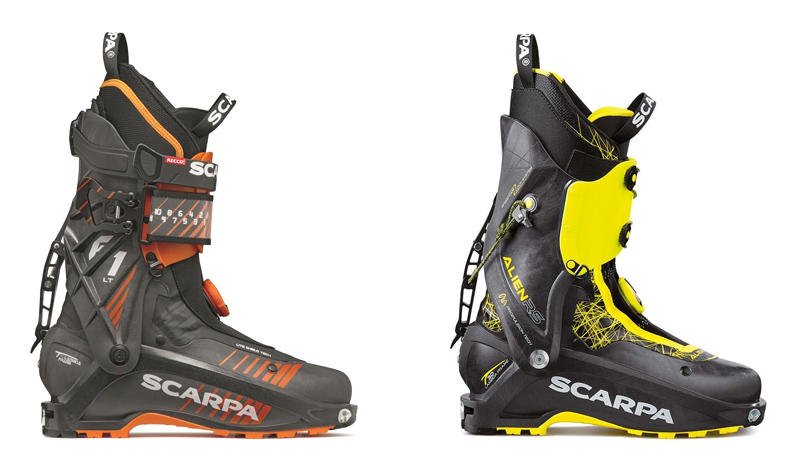 Scarpa made a radical choice going into the winter season 2020/21. It will be replacing the popular Alien RS boot with the new F1 LT.

Basically, the new F1 LT is a blend of features and functionality from the Alien RS and the F1 boots that will further enhance the already great downhill performance of the Alien RS while promising to keep the same comfort for walking and skinning.

However, the discontinuation of the Alien RS is already causing a debate among its fans as it was in many ways a very innovative ski mountaineering boot.

I had an opportunity to talk to Scarpa’s boot designer about the differences and similarities of the F1 LT and Alien RS at the recent 2020 ISPO gear show in Munich. He also hinted, or I understood it that way, the reason behind their intriguing choice to discontinue the Alien RS was a feeling that the new Alien 1.0 revealed last year was perhaps too similar in terms of a customer type (or intended use), and so orienting the F1 LT even more for technical skiing made sense.

In a press release Scarpa described the F1 LT as:

“Your new friend for ambitious traverses and technical ski mountaineering descents. Combining ultra technical elements with a backcountry-oriented design, the all-new F1 LT is our most versatile and lightweight alpine touring boot.”

The new F1 LT will be only a little heavier, at 990g in size 27 versus 920g for the Alien RS, and perhaps targeting a slightly different type of skier, but the

The most obvious change comes with the cuff closing mechanism as Scarpa have decided to drop the cord tightening system that was connected to the back locking lever and allowed for one-motion cuff locking and closing as it’s usual on skimo racing boots. Now, these systems will be independent on the F1 LT.

Also, the new cuff features reinforcements in critical areas where the Alien RS had some weaknesses.

At first glance, the bottom shell and cuff appear the same as the Alien RS but there are some differences. More people should fit into the F1 LT than the Alien RS. The boot will accommodate slightly wider feet as the foot will sit a bit lower in the new shell, offering a 99-100mm last.

The boot sizing will continue as before and so the F1 LT will be available in full sizes only, which might prevent some of us again to enjoy such a fine true ski mountaineering oriented boot. (I couldn’t fit into Aliens RS size 28 and the 29 felt quite big.)

The liner should stay the same, Cross Fit Tour LT made by Intuition and specifically designed for the last and volume of this specialized boot.

Another obvious change comes in the form of two cuff power straps which are staple features on the F1 boots. The top strap is easily removable and I suspect most Alien RS fans will get rid off quickly to safe few grams. The boots overall height, which is quite high for such a light boot, will be the same as on Alien RS and provide plenty of support so that top power strap won’t be needed by many.