After being out of the ski game for much of November and December due to injury I eased into January with caution. I have to credit my good friend and SkinTrack partner, Eric, for dragging me out when the conditions weren’t inspiring and I was still stressed out about hurting my ankle again.
With ankle getting better with each small outing I decided to go out on some true adventures as the only way for me to get motivated again.
And so in the past two weeks I spent seven days on skis of which only one was on race sticks on a ski hill and the rest in the backcountry.
This is how I survived it all – few cans gone missing. 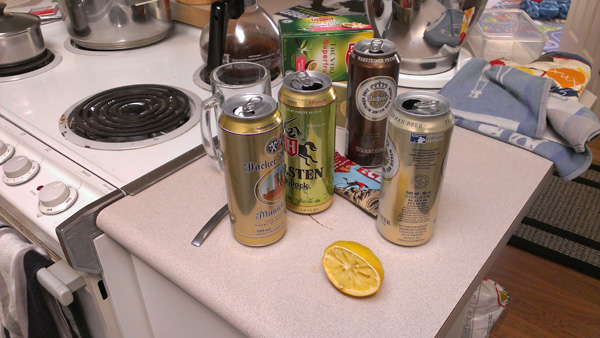 Bailing on a traverse

With unusual conditions (little snow, lots of sunshine) this year on the Coast, Brad and I decided to give a shot to 2 day traverse I did couple of years ago (North Joffre Creek traverse at Duffey Lake area). We knew chances were 50/50 but why not try and see. On the 2nd day we decided to bail as couple of slopes were asking for trouble.

After the unsuccessful traverse but very entertaining 2 days Brad and I teamed up again for a 2 day mission on Duffey again, but this time into Steep Creek area.

The night Brad and I came out of Steep Cr we enlisted for a big mission the next day. The objective was to summit and ski the North face of Garibaldi which means a heck of a long approach for a day mission with unknown obstacles awaiting.
Eric was the initiator and five of us (Eric, Brad, Gary, Carl, Stano) set out from the car in almost race-like pace in the morning. We had to bail about 200 m below the summit as we would be pushing our chances with daylight, not leaving any margin of safety in case something went wrong. We should have perhaps started an hour earlier but an hour lost walking roped up around “never-seen-before” crevasses in the fog was the bigger factor in my mind. We will be back for sure.
Photos by Gary Robbins.

After 2 days at Steep Cr followed by the Garibaldi mission I was pretty trashed but why not go ski something when it’s Sunday and stability and weather are great. And so with a good old friend, Rado, we headed back to Duffey eyeing to summit Cayoosh and earn some cash in the Million Dollar Couloir.