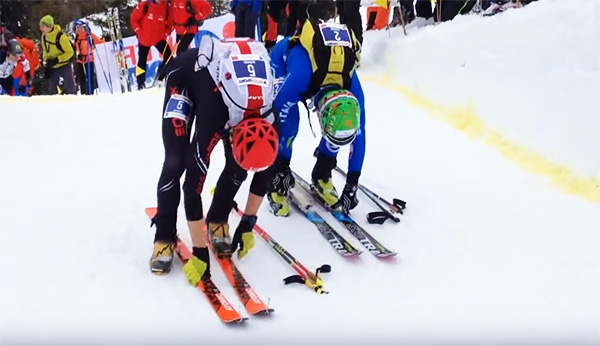 Sprint races are not really my forte when it comes to skimo racing. However, they are incredibly spectator friendly (good for the sport) and allow mortal athletes to closely watch the top guys.
After a quick spin, but not quick enough, around the sprint track at the recent Alpiniski World Cup in the qualifying round, I made a point to post up at the transition areas to watch the race leaders and their technique. I shot four videos from the men’s semi-final rounds and the final. Because the race also served as European Championships, there was a strong field in attendance.
There are three transitions in the race: 1) skinning to boot-pack where skis get attached to the backpack, 2) boot-pack to skinning, and 3) skinning to skiing or skins off for the descend. In a sprint race, every fraction of a second counts at each transition so regular practice is an absolute must.

In this semi-final round we see two Swiss athletes (black suits) using a “kneeling technique” to transition into the boot-pack. Notice their fluid movements when the bindings are released and stepped out of. The skis are put on the pack and then the poles grabbed before standing up.

The slow-motion section shows the faster Swiss athlete using the kneeling technique.
In the third clip of this video, we see athletes putting their skis on their packs without kneeling. This technique appears to be slightly faster but the margin of error makes it essentially the same.
Transition times (in seconds) are listed with each clip for the athletes followed and times are from the moment the poles hit the ground to the moment they come off the ground:
#8 – 7.4s
#24 – 7.7s
#1 – 6.9s
#7 – 7.0s
#9 – 7.4s
#67 – 8.1s

Here we see the athletes putting their skis on at the end of the boot-pack. It’s not a very technical movement but notice how they stay bent over the entire time. They drop the skis, open the bindings, step in to each, and THEN stand up with the poles.

Skins off: Skinning to Skiing

The mythical double-skin rip is pretty standard fare on the World Cup.
The first clip shows Italy’s Robert Antonioli into the transition first, he went on to become the new European Champion. He actually makes the transition look pretty mellow.
The carefully watch the last guy into the transition (Swiss – #4 – Yannick Eccour), he is the fastest of the group and looks very smooth. After that you will realize that Antonioli made few errors – he didn’t get his heels clicked in at once and took few pulls to get the skins off – but Eccour is flawless.
For the double-rip, watch #69 (Austrian). The key is to lock the heels first with a little hop, then bend forward to reach both skin tips and rip simultaneously. Some subtle differences to the Italian style! Also, notice the Austria athlete clipping his clip-in style ski poles simultaneously while already fully parked in the transition. It takes him more time as the others, using traditional ski poles loops, take their poles off while still moving forward. And final interesting points is that five of them are using the same ski poles from Leki.
Their times were as follows:
#2 – 10.7s (Antonioli)
#1 – 12.1s
#5 – 14.6s
#7 – 13.4s
#69 – 13.8s
#4 – 8.5s
Study up the videos and practice your technique! A few tens of a second in a sprint and even an individual race can make a big difference!
For more skimo racing technique tips see our Manual For Ski Mountaineering Racing e-book.