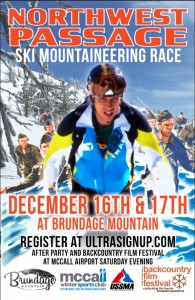 With the upcoming 2017 World Ski Mountaineering Championships to be held in Transcavallo region of Italy, the US Ski Mountaineering Association has designated two team selection races for athletes to test themselves and qualify for the big event. The first one is to be held at a new race called the Northwest Passage. The venue is Brundage Mountain near McCall, Idaho.
While this is the first year of the event, the organizers at Brundage are clearly excited to be putting on a high level race. The weekend of December 16th and 17th will feature a vertical race (Friday evening) and a multi-division individual race on Saturday. Both of which are qualifiers for the US National Team.


The Vertical event starts at the base lodge and climbs the blue-square pistes called 45-Parallel and Engen, to the top of the Bluebird Express for a total vertical gain of 520 meters.
The Individual event does include a recreational category (11.75km with 1180m+) but all those wishing to qualify for the national team will enter the elite category with 20.75km distance and 1950m+ over five climbs and descents! This is certainly on the lengthy end compared to the event for which athletes are competing to attend but will serve as an excellent challenge for potential team members!
Examining the route on the course map and Google Earth, we are struck by the amount of side-country terrain being utilized. While the race starts and finishes with on-piste terrain, four of the five descents appear to be off-piste – good news for those athletes who want to showcase their skiing prowess rather than pure speed skiing on groomers! Brundage gets ~760-890cm of snowfall per year though with the early season timing, expect some lean conditions!
Another interesting note is the max elevation (topping out the last several climbs on Sargent’s Mountain) for the race is only 2380 meters! This is a dramatic difference from the typical Colorado races that routinely climb above 3000m and will hopefully encourage competition from sea-level athletes!
At the moment, much of the Western US is hurting for snow. Colorado and Utah both seem to be pretty bare except at the highest elevations and where it is possible to blow snow.
Standard USSMA race equipment will be required, as well as a headlamp for vertical racers. Note that if you wish to receive USSMA points, you must compete in both events.
Race accommodation can found at inidaho.com which will have special event rates! Boise is the closest large airport and car rental area.
In addition to the Northwest Passage Race, the McCall Winter Sports Club and the Winter Wildlands Alliance will be hosting the Backcountry Film Festival on Saturday evening. All racers receive one ticket for admission with their registration and the awards ceremony for the weekend will be held at the festival intermission. 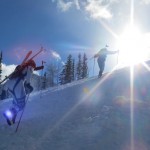