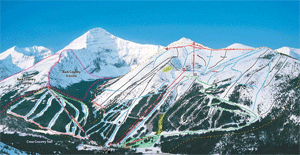 With the cancellation of COP’s Vert 180, Castle Mountain Resort took the place of the first Canadian skimo race of the season. With significant avalanche danger, the race course was on very limited terrain but given the conditions, organizers were able to pull off a race that satisfied all.
New snow and high winds meant much of the mountain was closed for avalanche control leading the organizers to delay the start to 11:00am, and run the course up the cat track to Haig Ridge and back down to the start again. Competitive class racers completed two laps with recreational racers completing one. Warm temperatures and blowing snow at the base area quickly soaked racers before they climbed into extreme winds high on the ridge (nothing recreational about this race for anyone!). 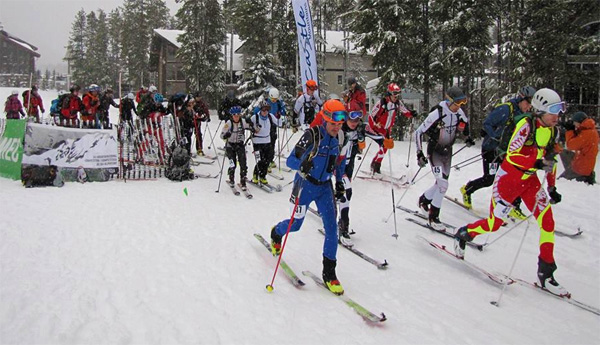 How it all went down

The men’s field was deep with most of the usual suspects in attendance but also some new faces including several accomplished distance racers from the Calgary area as well as several of our neighbours to the South from Montana. Given the remoteness of the ski area, attendance was spectacular. Starting up the low angle groomers, the pace was high until hitting steeper un-groomed snow where Reiner Thoni pulled away only to be seen again when doubling back each lap. The race was on for the remainder of podium spots with several racers struggling with balling skins in the warm weather. As the racers strung out behind, it came down to personal battles with the wind and steep climbs.
My own race went well despite switching skins midway through the first climb. I managed to ski well on the descents, despite blowing snow and stay ahead of Nick Elson giving a good chase, and finished second behind Reiner.
The female race was extremely tight with Marg Fedyna pulling away from the field to take the win. The remaining podium spots were only separated by seconds in an exciting finish as the second through fourth ladies raced the final descent together.
» Full results: 2014 Castle Mountain Race Results
A few racers opted to brave the wind and coastal temperatures and ride the lifts after the race while most headed for warm showers and back to race HQ for food and prizes. Organizers provided a good spread of snacks and beer and gave out a big stack of prizes from sponsors.
Also of note was the Castle Mountain Lodge. Our group from the Coast teamed up for a room but a few racers who didn’t reserve space ahead of time were turned away from a full house. While it feels like the middle of nowhere, the hostel was full so next year make sure to book a room ahead of time. The rooms were tight but clean and comfortable and situated 30 seconds from the race start line. The hostel was quiet in the evening, had a decent kitchen, and best of all showers that we were allowed to use after the race.