Andrew McLean is one of the icons of North American ski mountaineering, however, I didn’t know this until I met him couple of years ago at a ski mountaineering race. He won the event, and I believe it was the first time I got to see the Scarpa F1s racing boots in person, he wore them. Right the next day I researched him online and found him very interesting.

Andrew specializes in steep skiing in remote locations and has first descents on all continents to his credit. Some of the more exotic places he has skied at include Baffin Island, Antarctica, Iran and Morocco. Andrew’s current stomping grounds are Wasatch Mountains in Utah. You can following him through his blog at StraightChuter.com.

And here is more from Andrew in an interview about his relationship with ski mountaineering:

Q: How and when did you become involved in backcountry skiing and ski mountaineering?

I grew up skiing all the time as my mom was a ski instructor. This eventually led to racing and I was very involved with the junior program at our local hill, Alpental, which is about an hour outside of Seattle, WA. Alpental has a lot of steep terrain and easy access backcountry, so that kind of became “normal” skiing for me – steep slopes with funky conditions. 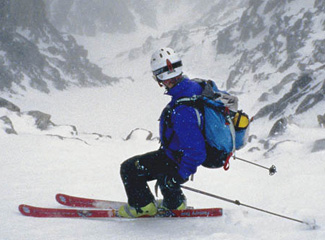 After High School, a friend turned me onto rock climbing and I spent a lot of my summers doing that, then when it snowed I went to the resorts.

Years later, when I started working at Black Diamond Equipment, I met Alex Lowe and he turned me on to the idea of combining the two sports. I had always thought backcountry skiing was more like shuffling around on the flats, but Alex opened my eyes to the idea that you could find and ski way burlier stuff in the backcountry than you could ever find at a resort.

For the first few years I still did some resort skiing, but after I got my backcountry systems figured out, I started doing more and more of it, to the point that that is all I do nowadays.

Q: What keeps you still going strong from one adventure to another, what’s your motivation? And what do you like the most about backcountry skiing?

As far as adventures or expeditions go, skiing is a great way to visit new places, meet people and see different cultures. I love the aspect of going somewhere new and taking a chance on the skiing – a lot of times it is so-so, but when you find some killer new spot, it’s like hitting the jackpot.

I’m also into the idea of skiing projects, like going to all seven continents, skiing ten classics on ten consecutive days, skiing a group of three related peaks, etc.. It is like having bunches of little collections.

I think, the thing I like most about backcountry skiing is that it is a complex sport with so many different aspects to it, like skinning, route finding, avalanche safety, pacing, knowing when/where to go and the actual skiing itself. I first got into it just for the skiing, but now I really enjoy the entire package.

Q: You are a father now. (How) did that change your approach to skiing? Are you more careful?

I’d say I’m more careful now, not so much because I’m a father but more because I’ve seen so many talented and careful people have accidents or die while skiing. I’m also focusing more on skiing in cool places nowadays instead of just trying to find the steepest possible line.

As much as I love steep skiing, it takes perfect conditions to ski really steep slopes and you can burn up a lot of time, effort and energy by traveling around and hoping to hit it.

Another factor that comes from experience is that I think I am more selective about what and when I ski things now. If it seems like there is a chance a slope could avalanche, I’m more likely to pass it up knowing that I’ve skied tons of killer powder in the past and that this is not really a once-in-a-lifetime run.

Q: You have recently skied a first decent on Mount Foraker in Alaska. How does this adventure rate among your others?

It was right on up there! There was very little actual good snow on the line when we skied it, but the overall experience was excellent. Foraker is definitely a mind-game mountain as you have to stay alert and motivated the entire time due to weather and crevasses. I would go back again just to ski that line (the Sultana Ridge), but it was a blast to do once.

Q: How many sleeping mats/pads does one need to get a good sleep in base camps of Alaskan giants like Foraker. Hunter or Denali?

I learned the hard, cold way that it takes more than one! On our first trip to Denali, I only brought one foam pad and it was a fairly miserable experience. I currently bring two pads (one inflatable and one foam). On our last trip I used an ExPed Down Mat pad which was enough by itself as it is super thick.

Q: What is your next ski mountaineering project going be?

I’m heading down to Antarctica in November as part of Doug Stoup’s Ice Axe ski cruise. The plan is to take a cruise ship across the Drake Passage, then use it as a floating base camp to take skiing day trips out on the Antarctic peninsula. It should be fun.

Q: Who or who’s ski mountaineering projects/activities currently inspire you, or you find interesting?

I’m inspired by all aspects of skiing and love watching free-skiers rip big lines, people huck monster cliffs and reading about the amazing speed of the Euro Rando racers.
Currently, when it comes to ski mountaineering inspiration, I like the idea of mixed media where you are exploring an area mainly on skis, but perhaps adding in some kiting or PackRafting.  In that regard, I think some of the trips that Joe Stock from Alaska is doing are very cool as they are remote and exploratory, but still have some good skiing in them.

Q: In the past, you were involved in gear and equipment engineering design. Are you doing that these days too?

I’m still a designer by profession, although my skiing has gotten in the way of it. Due to my trips and new family, I’ve been working on lots of smaller projects rather than the multi-month or year long ones.

Q: Did you take part in any ski movies in your ski mountaineering career/life?

I’ve been in a few including most recently, “Steep.” Ski mountaineering is not very camera friendly as you have to haul lots of gear into the backcountry and the weather seldom cooperates. On top of that, I like skiing steep lines in remote places, which means I tend to ski very conservatively, which is exciting to do, but not necessarily watch.

Q: What do you do immediately after returning from a big trip?

When it comes to trips, I’m an organizational freak. I start packing days ahead of time, sort gear, check everything out, etc.. I also like to leave the house completely cleaned up so that when I come back, I can just dump out all the gear, clean it off and put it back. It usually takes me 2-3 days to catch up on email and phone stuff, as well as hanging out with the dogs and kids.

Q: When planning a trip/expedition, what are the most important things to do to increase the chances of achieving the objective?


I spend a lot of time thinking about trips in advance and while I always assume they will be successful, I also think about all of the things that could go wrong and how I would deal with them.

In that regard, I do a lot of careful planning. Probably the #1 thing I’ve learned is to allow plenty of time for a skiing trip as the weather and travel snafus can cut into a tight schedule.

If everything works out perfectly right from the start, then you just have some bonus ski time!

All photos in this article are from Andrew McLean’s photo collection and were taken by Andrew or his fellow trip companions.