The Canadian Skimo Cup kicked off with its first race of the season at the Canada Olympic Park in Calgary last Saturday.
With its unusual format – start at 6pm to do as many laps as you can in 3 hours – and working within the venue’s terrain (135m climb) it provides great opportunity to practice skimo transitions and to have fun with friends in a relay team or going solo. There were over 70 athletes participating.

Race Recap and Most Notable

Before you study results in detail below I would like to point out that the juniors were racing for 1.5h instead of 3h and within that time only a 14-year old Tom Stevens managed to clock in 9 laps just like the top men were doing! That is 1215m in 1.5h including 9 bootpack and skins-off transitions, plus 8 skins-on transitions at the bottom. If Tom keeps at it then Canada might have a medal contender for World Championships in cadet and junior categories in the years to come! 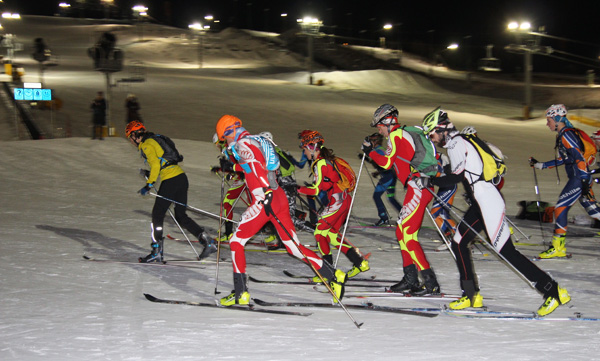 Men’s race:
Another notable moment came when Travis Brown, a leader mid-way, had to drop out of the race from first place due to stomach problems that were impairing him the days leading up to the event.
After that the race for first was a close battle between Peter Knight (18 laps) and Joel Desgreniers (17 laps) with Peter coming out on top. Matt Reid (17 laps) secured the final step on the podium.
Women’s race:
Once again, Kylee Ohler, pulled of a great performance the whole day – organizing the event itself and then racing – to come up with a solid win and collecting 17 laps for a total of 2300m. Michelle Roberts was racing well and trying to stay close but eventually lost about by 1 lap (10-12min) to take second. Marg Fedyna took third with 14.

There were also 2 and 4 person relay teams lapping the course and having great time.
» Full results are here: 2016-Vert180-results