It was a busy two weeks of racing in North America and Europe! Read on to if you have missed anything.
» For previous weekend’s racing news see here.

The Wasatch Powder Keg and North American Ski Mountaineering Championships held at Brighton Ski Resort brought together some stiff competition for the racers and big challenges for the race organization.
The Friday night sprint race was a big success with Tom Goth from Salt Lake City and Kylee Toth Ohler of Calgary taking home the North American Sprint Championship titles. The sprint race course was a 107 meter (353 feet) climb with a flat start, several switch backs, a boot-pack, and another short climb followed by an 8 downhill gates descent. The fastest men’s time for any lap was Tom Goth’s 3:18 winning lap. The fastest women’s time was a tie between Kylee’s winning lap and Gemma Arro’s qualification lap in 4:08.

The individual race was held on Saturday in beautiful spring conditions. Tom Goth again took the North American Individual Championship title while Stevie Kremer of Crested Butte drove late into the night to race and win the Women’s title. The winning times were 2h 13min for Tom and 2h 35min for Stevie.
The 2016 Powder Keg individual race was held on a new course that utilized less in-bounds terrain and was enjoyed by all racers. The course conditions were challenging with a hard refreeze on Friday night leading to some very hard and icy climbs early in the day. We were excited to have our largest junior showing to date with 6 male and 3 female athletes ranging in age from 9 to 16.


The race organization had been watching the weather closely all week and were anticipating a Sunday morning storm. Contingency course plans were set in motion on Saturday afternoon, however, Sunday morning brought a much stronger storm than expected. The organizers and volunteers headed out on the course and 5 minutes prior to the race start made a difficult decision to cancel the event. Snow was falling at more than an inch per hour, ridge top winds were sustained at over 35 mph and gusting to 75 mph, making snow-pack stability quickly deteriorating. While disappointed, all racers were supportive of the decision and most made the best of it with their own in-bounds team vertical to the top of the Millicent Express Lift.
Results HERE
Thanks to Mike Foote, Chad Brackelsberg and Nick Francis for their contribution!


Want to see more coverage of women’s racing? We need a female correspondent! Send us an email if you’d like to contribute! 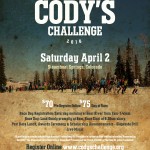 Next up on the COSMIC schedule is Cody’s Challenge in Steamboat Springs, CO.
Also make sure to save the date on April 9th for the Big Sky Shedhorn Skimo race. This promises to be an exciting one, with crampons, ice axe and whippet on the mandatory gear list (!?). Check out their Facebook Page for more info and updates as well as registration.

Although various Presidential candidates might object that Owl’s Head is on the other side of any pending border wall, this Quebec stop in the Skimo East series the following day was combined with Jay Peak for the weekend standings. George Visser and Andrew Drummond once again took the top two spots, but Northern NH famed mountain man Tristan Williams made the podium in only his third skimo race. Lyne Bessette dominated the female field as always, placed fifth overall in only a little over a minute off the podium, and took third overall for the combined weekend results. In the combined weekend’s highly unofficial Nations Cup, the United States avenged its split decision against Canada over a month earlier at Burke by winning on all four conceivable measures.
Photos by David Moore

Although the nation moved the clocks ahead a mere hour on the weekend, New England seemed to skip a month ahead with the final weekend of operations for many ski resorts. Fortunately, Magic in Southern VT had just enough remaining snow for long efficient skin tracks and some decent skiing. As for the boot-pack, who needs snow for that, right? Jerimy Arnold took the win followed by Josh Flanagan, with QT2 Systems triathlon coach John Spinney on his first podium in his skimo season debut.
Skimo East Results HERE

Pending ski resort closures and dwindling terrain options have led to a game of musical chairs for the remaining races. The disappearance of the Northern VT backcountry snowpack has cancelled the Bolton Valley 24-hour race and the Sugarbush traditional race, so the Southern VT Bromley race has been moved ahead to March 19 to take advantage of the resulting opportunity in the schedule and the remaining snow. The Northern VT Stowe evening crit-style race on still on for March 26, as is the Central VT Pico race for March 27 even though the resort will have been closed for two weeks by then.
Thanks to our Skimo East SkinTrack.com correspondent Jonathan Shefftz for the write-up!

No racing took place in Western Canada since our last update (good for the Coastal guys who have been enjoying lots of powder lately) but we are looking forward to Canadian National Championships – the Ken Jones Classic in Lake Louise, AB. This is shaping up to be potentially one of the most competitive skimo races in Western Canada in recent history. A strong contingent of skiers from the Coast will be looking to challenge the Rockies locals but registrations are coming in from the US as well.
Nick Elson will be trying to take his second and consecutive National Championship title but will have a couple of serious challengers. There are the usual suspects like Peter Knight, Travis Brown, Stano Faban… but Rob Krar, an ultra-running champion, will be looking to see where he stacks up among the Canadians if he plans to make a National Team bid for next season. On the women’s side, Kylee Toth Ohler is skiing very strong at the moment but with Melanie Bernier back on this side of the Atlantic, the two will most likely fight it out.
If you are looking for a reason to visit the gem of Rockies, book a ticket to Calgary, come race at Lake Louise and then shred pow in Rogers Pass the rest of the week!
Registration is LIVE

It’s the mythical Pierra Menta – four days of racing in beautiful Areches-Beaufort, France. We would have written separate articles for each stage if we had a correspondent in attendance (like last year) but here’s a quick summary:
Killian Jornet and Matheo Jacquemond dominated by winning three of the four stage and by 10 min lead over 10 hours of racing. The Italian favourites (last year’s champions) dropped out with an ear infection while the other Italian team – Michelle Boscacci and Robert Antonioli – skied to a strong 3rd place overall finish. They were bested to second place by the French team and hometown favourite cheese maker William Bon Mardion and Xavier Gachet.
For the women, the ‘Queen’ of skimo Laetitia Roux paired with her young French phenom teammate Axelle Mollaret and really dominated the race, winning the overall by 50 min over 13 hours of racing!  This must have been a bit of a pill to swallow for Roux’s long time Pierra Menta teammate Mireia Miro who was competing with her Spanish teammate Claudia Galicia and finishing in second. The Italian team of Katia Tomatis and Martina Valmassoi rounded out the podium.


While the Canadians didn’t field any teams this year, USA sent the Colorado dream team of John Gaston and Max Taam as well as Scott Simmons and Paul Hamilton (making his debut on the European skimo circuit). Gaston and Taam raced well the entire week, maintaining a steady position, and finished in 15th, tying the previous best men’s North American finish. Simmons and Hamilton went very well the first three days but botched the last day. Yet they still finished with a very respectable 41st place.
Videos and Results HERE

The ISMF calendar continues with a vertical, individual, and sprint event in Mondole, Italy at the Prato Nevoso ski area. Hurting badly for snow earlier in the year, Prato Nevoso is looking good to go. Don’t expect Kilian Jornet to slow down and Laetitia Roux will likely continue to dominate with the loss of several top women to injury.
The next Grande Course race to come is the bi-annual Tour du Rutor in Italy at the beginning of April.
ISMF Racing News
Check out our big 2015/16 skimo calendar for upcoming events this week and into the future. Still lots of racing left this season!