In the previous article on rando skimo racing summer training I talked about “bread and butter” – the benefits and importance of endurance base building during the summer months for ski mountaineers that absolutely want to improve their performance once the country turns white. 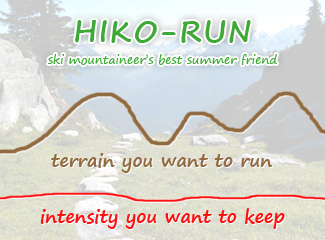 Here, I am going to discuss a workout that tremendously helps with building your endurance base while making you practice almost the same movement as on skis by working the same muscles as used during skinning.
I have been using this type of a training session long time ago but only years later I started to fully appreciate how many benefits are packed into it, and it’s not all only about your lungs.

The term “hiko-run” is made up. I never heard it before I and a couple of friends came up with it. But it’s possible other people use it as well.
The need for such a term came from not being able to describe “a run that also featured walking parts” – our training diary was asking for something simpler.

Our small training group (back then I was a triathlete) never intended a running session to have walking segments but when, for training variety reasons, we wanted to run trails with long climbs while still remaining at low intensity (base building) we had to switch to a walk, or a hike mode.
In order to stay aerobic [Wikipedia link] on the lower spectrum of exercising heart-rate intensity for long periods of time our coach wouldn’t let us run over the hills. And so the “hiko-run” became a new term and a training tool.
You might be asking why one wouldn’t want to keep running even over small hills, no longer than 2-3min?
Well, even such a small hill can take you from low aerobic endurance intensity up to somewhere below your anaerobic threshold [Wikipedia link]. See also anaerobic exercise on Wikipedia for more details.
Now you maybe ask “why is this not desirable?”
Let’s say there were 10 such hills during your run and you sort of powered over them. With that you almost completely changed the goals/effects of that training session. I am not saying you should never run over the hills, I am saying that you should be quite mindful during every session to achieve desired training effects in the long term.
You can keep running over these hills right from June or July if you simply want to, however, you will be doing something that would have greater benefit on your performance if you introduced it few months after you built up a solid low intensity endurance base.
For the sake of simplicity I am going to stop discussing the physiology whys and whens right here as it might confuse less experienced ones. If I answer another why then I would have to answer many more whys and whens to fully explain this 😉 but feel free to ask in the comments below or email me.

Apart from a great exercise this session usually means beautiful trails and views as it is basically hiking with poles with a slightly longer stride.

How to do it properly:

Pick an objective (a mountain) with enough vertical gain that will have you climbing for at least 30min, doesn’t have to be very steep. I do anywhere from 40min to 2-3h. All depends on terrain available, your fitness, and goals.
Throughout the whole session try to stay in the endurance base building intensity – more or less being able to carry a conversation:

Experiment with frequency and length of your stride and because you will have poles you should use them to push off like when skinning thus getting a slightly longer stride. And remember to use hand straps.
To allow for a full arm extension your poles will need to be about 5-10cm shorter than what you use for touring or skimo racing.
>> See this article to figure out the best length for your skimo racing poles.

The main benefit to me is the relaxing energy of nature, and that you can do it with slower friends as the goal of the workout doesn’t require you to hammer away, or to unconditionally focus only on yourself.
Physiological benefits are:

Hiko-run without poles is pretty self-explanatory but there are some differences compared to the pole version. Mainly, there is more running than hiking. I guess it could be coined then as a “runo-hike” 😉
This version can be used as a starting point if you don’t feel strong enough to sustain long climbing yet, or simply as a variation in your training whenever throughout the year – that’s how I use it.

How to do it properly:

Choose a trail/course that has some small hills. Adjust the vertical gain and length as desired. I do anywhere from 40min, when pressed for time, all the way up to 3h of total climbing time.
Again, during the whole session try to stay in the endurance base building intensity – on the hills ease off the pace to keep the intensity low. Since the vertical gain isn’t very much you should be able to run the flats while staying at low intensity. Downhills are up to you, I usually jog them but sometimes switch to walking if my legs feel too sore.
Stride length and frequency is very individual and I would advise to consult some experienced runners on this. My general advice would be, rather keep the frequency higher and stride shorter than the other way around. But mainly, just run and don’t worry much.

The main benefit is that you can quite comfortably cover lots of ground fast yet not be as sore the next day as if you run it. And the base building benefit is still there.
Physiological benefits are:

Hiko-run as a year round training tool

I believe it is beneficial to keep hiko-running or simply running even in the winter:

Sometimes I don’t run for couple of weeks during the winter because simply there is too much snow everywhere except paved roads, which I don’t like. However, when I get a chance to squeeze in a run even once in 10 days I can feel that my legs sort of “correct their timing” a bit.

If you found this article helpful tweet it, or share it with friends that can learn from it.
And feel free to ask anything in the comments below.