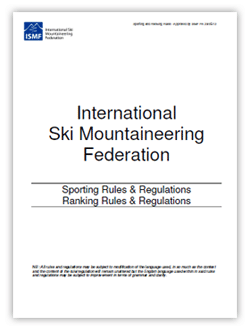 This is a brief look at some important points and changes that you can find inside the recently approved (June 23, 2012) ISMF ski mountaineering competition and ranking rules for the 2012-2013 season.
Here is a PDF of the full document – 2012-2013 ISMF Sporting and Ranking Rules.
This document mostly affects only those planning to race at ISMF sanctioned events such as World Championshisps, World Cups, or other ISMF certified races.

Understandably, majority of rules and regulations stayed the same as they have strong basis.
However, many new small changes helped to simplify and clarify the interpretation of specific rules, therefore, removed lots of “grey areas” from the whole document.

5 most important things inside the new rules

Comparing to the previous regulations version, the vertical races will be shorter for all categories. Now:

Individual races will get longer compared to the past. Most importantly:

Team races will get longer too:

Sprint and relay courses will stay about the same.
Personally, I believe this is a change for better:
Ski mountaineering races shouldn’t be sprints if we want them to stay true to their roots. On the other hand, shortening the vertical is fine as it never really was a traditional skimo discipline, and now will provide one more race to seriously focus on for the explosive types.

Regulating is one thing, enforcing another. I hope that these limits will finally be enforced. This is not to say some racers were not complying before but rather to imply that the limits seemed to be checked only very sporadically.

There should be less confusion of what is required for each type of race from now on as the ISMF simply made one list of compulsory equipment that will be the same for all races. Obviously, some additional equipment (crampons, headlamp…) might be necessary if conditions ask for it.

The points system for World Cup and World Championships races changes from “race time points” to “fixed points”. This means the points will be determined only by your finishing position and not by time lost to the race winner.
Personally, I like the old system because I believe it gives a better picture of racer’s performance over a long period of time, just like the cumulative time from all stages at big cycling races. However, I understand that it is some times difficult to explain to wider public how they are calculated, so a simpler version might be better.

In the past, time penalties for lots of rule infractions (skiing where not supposed to, equipment weight…) were defined between 1 to 5min penalties (all the way to disqualification). The new rules introduce lots of out-right DQs.
The new DQs make a lot of sense and should have been introduced sooner because how can anyone say that “a lighter ski gives only such and such advantage, so lets penalize it with 3 extra minutes.” Now, if the minimum weight rule is infringed it is a simple DQ, the racer knew all along what he was doing.

Planning to race in ISMF events?

If you are planning to participate in races where these rules will be effective then I encourage you to read the whole document as you don’t want to be sent home from the start line.
Also, only if you know the rules you can mentally note an infraction by another competitor/team during a race and file a protest at the finish. Or successfully defend yourself.