After talking about gear game changers and people that influenced their skiing Greg Hill, Melanie Bernier, John Baldwin and Christina Lusti answer the 3rd and final question in this series. As before, I am attaching my answer at the end.
I hope that you enjoy these articles because the people answering seem to like it a lot. If you do spread the word cause it’s likely your friends would enjoy it too.
And share what event influenced YOUR ski adventures – you can do so via comments section at the end of this article.

3rd question: What is the one event that changed or influenced your ski adventures (whether that be touring or racing)?

Greg Hill says (http://www.greghill.ca):
I skied from aged two; it was a passion from the start – ski racing, jumps just having fun on the slopes. I recall in Grade 3 being extremely excited because I had skied more than 60 days that year. The freedom of speed and fun of skiing was deeply ingrained in who I was.
I skied until I was 16 and then got taken up by rock climbing. All of a sudden skiing was second place and rock climbing was first. The incredible challenge, endless progression and exploration was all that I could think about.  For 6 years I rarely skied but climbed exclusively.
Then at 22 years old I dislocated my shoulder while rock climbing. All of a sudden this whole side of my life was taken away from me…which left me with a huge void. Then explorer in me had been awakened, the search for challenge had been continuous for so long that I needed it. 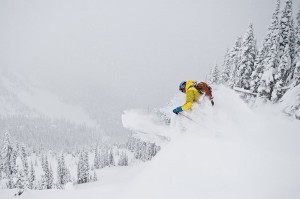 So I set my sights on climbing and skiing mountains, this filled the void and more. Backcountry skiing was challenging physically, the development of my mountain sense mentally stimulating, the exploration endless. It was sad to lose the climbing but I gained so much more in return.
I started recognizing that I had more energy than most, that I could move quickly and efficiently through the mountains.  I would be standing on top of mountains looking at what I hoped would be our next run only to see that my partners were exhausted.
So I entered my first randonnee race in whistler, came in as a canadian should, mullet and leather jacket. Had a blast during the race and somehow ended up winning it. This prompted me to continue pushing my speed in the mountains to see what my potential was. Later that spring I returned and did the Spearhead Traverse in 4 hours 1 minute and really started to push the limits of the possible.
Since then I have pushed my endurance endlessly and loved the limits, I have progressed – so many traverses, mountains, new lines, huge days and great times.
Had my shoulder not dislocated I would have continued to have fun rock climbing but possibly I would not have developed into the mountain man I have become. I would have missed out on so many great adventures that I am almost happy it happened.
Now 14 years later I have a reconstructed shoulder and I am climbing again, which will inevitably help progress my technical limits of ski mountaineering.
Melanie Bernier says (http://inthetrails.blogspot.ca):
Back in 2010, a few of us from the Canadian National Ski Mountaineering Team stayed in Europe after racing the World Championships in Andorra to take part in a 4 days stage race – the Pierra Menta – in the small town of Areche-Beaufort in France.
Day after day, teamed in pairs we covered at great pace routes with around 2500m of climbing. This event really opened my eyes to what really is ski mountaineering racing, its roots and how respected and part of the culture it is in Europe.
Granted we suffered and pushed our limits but it was such a great feeling of accomplishment to work as a team, pace ourselves and cross the finish lines with a large smile at the end of each day. Coming to a summit with 1000 of spectators cheering was an experience I will never forget. This event and skiing in Europe all together has forever changed my vision of racing and even skiing in the backcountry.
In this video from 2012 (in around 1min) you can see what kind of atmosphere Melanie is excited about:

John Baldwin says (http://www.johnbaldwin.ca):
It was on my second long ski traverse in the Coast Mountains. We were trying to complete a 3 to 4 week ski trip from Ape Lake to Knight Inlet across the Monarch and Ha-iltzuk Icefields, west of Mt. Waddington, BC.
The last quarter of the trip goes through some really rugged terrain with steep slopes and big icefalls. A big storm moved in with tons of new snow. I started to worry about whether the conditions would be good enough for us to finish the trip (there were no other escape routes).  But at some point I had this intuition that it would work out. You could say I was learning to listen to the mountains and what was in my heart.
It is something I have always tried to do in difficult situations. It’s not always easy to do but I think it’s very important to listen to the mountains and the earth.
Christina Lusti says (http://christinalusti.wordpress.com):
ACL reconstruction on my knee . . . sad to say there was more than one surgery L. But this was the event that made me decide to step away from ski racing and start a new career in ski guiding and ski mountaineering.
The injury motivated me to get strong and walk/ski away from the competitive sport of alpine ski racing 4 years ago. Since then it has been winters full of Adventure School, Coaching, Training, and exploring the steep alpine . . . no regrets!
Stano Faban (Skintrack.com):
The one event that changed my approach, or I should say “understanding”, of skiing didn’t happen during a specific experience or on a certain day. It is actually still happening. It is an ongoing event since it is a perception changer for me, fueled by constant learning and curiosity.
To hopefully demystify and clarify – the terrain, and people I met and keep meeting while backcountry skiing after moving to Canada are responsible for this ongoing event.
Skiing before was fun, was a sport, was a great way to explore, but in no way I would understand how much it could affect people’s lives. How fulfilling it could be.
It didn’t start happening right after I moved but couple years later. I guess, I needed to meet the right people first J. Run after run, trip after trip, winter after winter, I started to understand why anyone would arrange their whole life around skiing.
The backcountry skiing culture in Canada is unique, I believe. This has a lot to do with great snow, terrain, and work opportunities.  If you don’t grow up with those your perception is different and you need a while to put the pieces together.
But through spending time with open-minded people and experiencing emotions from riding dry deep untracked powder you start to understand. You start to look for slopes where there is no skin track even though it means work, and you can manage to sore your ass in a car for hours because you know what is waiting, or because you actually don’t know.
So something like this changed my ski adventures because I think of skiing as a whole differently. Before, the trips needed to have a goal (a peak, or a specific run) to feel fulfilling. Now, it’s more like: How do I ski today just so I can feel happy the whole day?