In this well written essay one of our fellow skimo racers, Jeremy Rietmann, shares his candid story of personal evolution that was forced upon him by a “simple” challenge of teams racing.
It’s always moving when people are willing to share their lessons, and especially so when they let us peek into their minds as deeply as Jeremy does here. Stick to the end and it will surely help you reflect on your own racing ups-and-downs. 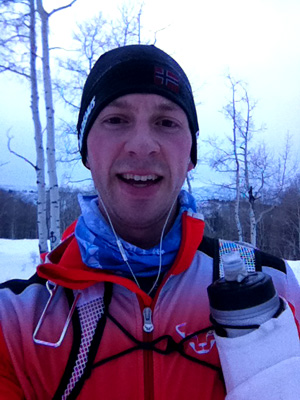 In its inaugural year, Lou Dawson asked if Aspen’s Power of Four was the greatest ski mountaineering race in North America.  Dawson was hyping his local hill, but three years and 75+ racing miles later, I say it is.
There are other North American races with more memorable technical elements, more off-piste terrain or offer better pure skiing. Nevertheless, the mental journey that one must navigate to successfully complete this race is more fascinating to me than the physical undertaking itself.
In the Power of Four, mastering your own mental landscape is the true test.  It’s the ‘Fourth Power’ that makes or breaks you when faced with the three major external challenges this race presents.

First is the obvious physical hardship. Nearly 12,000ft of climbing over 25ish miles as fast as you can go is difficult. Pete Swenson found Karl Meltzer’s evil Speedgoat 50k race recipe and winterized it.
The second factor is that it’s March, high in the Colorado Rockies.  The ascent of Highland Peak, topping out at 12,382 feet, can be bitterly cold, yet the snow-reflected high-altitude sun could quickly have you overheating. You have to dedicate additional energy to self-care or simply Mother Nature will have her way with you.
And, it can never be forgotten that this is a skimo teams race! This means you get to go on a delightful journey of low-electrolyte self-discovery with another person doing the same. It’s best to realize this before toeing the starting line.
Each of these challenges build upon each other and can easily overwhelm an underprepared mind.

In 2011, I came into the race not fully certain of what I’d gotten myself into. But, I had recently toured the 40+ miles from Eagle to Aspen in a quick overnight with a couple of friends, had a good build-up of training and was reasonably confident in my ability to finish.
I paired up with my regular climbing partner, Doug, and we set out not sure what to expect, but knowing we were in for an experience.
What occurred was an unfortunate – unbalanced pairing of expert mental toughness, internal mastery and proper self-care (on Doug’s part) versus my mental weakness, negative mental dialogue and inattention to the details (water and caloric intake in cold conditions) as minutes turned to hours and hours became several.
Unsurprisingly, I bonked hard mid-way up Midnight Mine road, and lacking a tow rope Doug pulled ahead to let me slog along in my own misery.  Only later did I realize he did me a favor by sparing me his own rage and frustration at my poor attention to nutrition.
Running low on fumes and good sense as we approached the Sundeck I decided this would be a good time to rant that it was not helpful that he had pulled ahead and “left me behind.” But Doug, as the true friend and real climber man-beast of the two of us, ignored my nonsense and we skied down to a respectable finish.
I crossed the line, but he allowed us the finish by dragging me along on his invisible tow rope made mainly of my own desperation in trying to catch up with him to give him a piece of my mind.

In 2012, after a better build-up of training, experimenting, and much more experience with long-endurance racing, I teamed up with another longtime college friend, John.
We went to have fun, work hard and finish strong.  But we were mismatched in a few aspects.
He was training around 25 hours per week (for off-road triathlons) and his general aerobic fitness was superior to what I could attain on my measly 5-10 hours per week.  Yet I knew my specific ski fitness was solid, giving me an advantage on the long down-hills. I also had better transition technique and had the advantage of having completed the race before. Added together, perhaps it could be a good combination after all.
We raced well up and down Snowmass and Buttermilk, but as we roped together with me on tow at the base of Aspen Highlands (as we had planned prior to the start of the race) my ego got the best of me.
My internal dialogue became more deluded with each step upward.  It created an internal conversation wholly toxic to our goals that day. My muddled mind argued: “Why are you struggling? I am the one who has been rando racing all season. I know the technique! I know the lingo!”
Useless.  All of it.
Then came the Congo Trail.  If there’s one thing I am very good at, it’s what I call ‘survival skiing’ – shitty, fast, narrow, scary, tree skiing.  And the Congo Trail is the definition of it.
I dipped in first and my earlier frustrations and inadequacies fueled me all the way to the bottom.  I didn’t look back.
I transitioned at the base of Midnight Mine road and waited. For 10 minutes.  Finally, John arrived upset and thoroughly pissed.  And I was happy to reciprocate.
John had been waiting for me at a road crossing just upwards from me. He didn’t know where I was and was concerned I may have wrecked somewhere uphill from him.  He also didn’t know the course as well, and didn’t know that the true base of the descent was straight across the road from where he was waiting for me.
Also, this is probably a good time to mention that John, my partner, is totally deaf.
It’s a pretty common theme in the Deaf Community that nothing frustrates a deaf guy more than being left out of a conversation or feeling out of the loop. Saying, “never mind” to waive-off the inconvenience of having to explain a super minor thing you have said to someone else in front of a deaf person is the height of rudeness.
So, as one might imagine, leaving your deaf partner behind on a fairly unknown race course was about a million times more inconsiderate.  Oops.
We had a healthy round of shouting, raging and f-bombs, all silently read on my lips by him mind you. And I did include the appropriate body language and facial expressions to be sure he knew where I was coming from.  He let me have it too.
We kept on moving and arguing until we exhausted ourselves, and then didn’t communicate for about 20 minutes.  Eventually I tamed my ego and went back on tow and with each step upwards we climbed back into reality, made peace, and found our way to the finish line.  One hour faster than the previous year with Doug.
Happy to have finished, but with far too much mental strain than was ever necessary.  I resolved to never let that happen again.

In 2013, John and I again teamed up for the Power of Four.  We both had a desire to improve our time from 2012 and I think we both secretly wanted proper redemption for ourselves by tackling this race as a whole and unified team.


I worked long and hard in the year between the two races to find and experience my mental state as it manifested itself during long, grueling endurance efforts.  I grew to be adept at finding it, viewing it within myself and not judging it.  I learned from it and eventually changed it.
2013 was a thrilling race. John knows I need reminded to eat and drink.  I know it too and have become much better at reminding myself.  So he cued it up when relevant, and I did the same.  There was no judgment, no ego, we just knew we needed to look out for each other to make a strong finish possible.
This year we climbed Aspen Highlands separately and didn’t pull out the tow rope.  We simply kept track of each other, reminded ourselves to fuel up regularly and planned ahead.  I carried less water than John and ran out at the top of the Deep Termity lift.  I knew this would lead to cramping and a potential bonk if I didn’t come up with a solution.
Knowing that I would transition faster than John, we agreed that I would ski down as fast as possible, skin to the entrance to the Congo Trail at the final aid station, and do everything in my power to rehydrate and refuel for the long brutal slog up Midnight Mine road.
It was a smart tactical decision. I got a good 10-12 minute lead on John, which gave me plenty of time to fuel up. When he arrived, I waited while he gathered up everything he needed to refuel and prepare for the remainder of the race.
Then, we skied down the Congo Trail – this time together.  John had only been on skis four times this season prior to the race, so the Congo completely destroyed his legs.  The endless wedging-in-the-back-seat isometric contraction sucked the life out of him.
As we started up the road, he began sweating profusely, wondering aloud what the symptoms of heat stroke were and I looked back and saw the panicked look of ‘bonk’ in his eyes.  But, this time we worked together rather than against each other and our minds stayed peaceful and calm.
He asked for the tow rope and we put one foot in front of the other at the same clip without pause all the way to the sundeck.
We even passed a couple of teams and crushed their spirits late in the race. We also finished yet another hour faster than the year before.  It was a beautiful thing.  A positive, powerful mental landscape makes everything in life better.

Struggles keep me coming back

This is what makes the Power of Four the best skimo race in North America.  It’s a monstrous undertaking that breaks a person down to the basics – keeping your mind calm, keeping your ego in check, empathizing with and recognizing the suffering of others, and recognizing your own weaknesses.
I got what I came for.  Overcoming difficult things pushes us to confront and accept even greater challenges in the future. It allows us the opportunity to become more than we once were.
This race, and all the training and hardship necessary to make it possible, has made me a better person.  And that’s what we should all be striving for.