This is a review of my current touring setup.
I skied the gear described below from December last year until June 2012, and I will be skiing it this season too. Also, I used the Performance boots with other skis on some really hard-pack and corn snow.
When I chose this setup I was looking to balance couple of things. But mainly, the need was to find something that gets me from December to July and is reasonably light. Color didn’t really matter. 😉
I didn’t want very wide touring skis, as is now common, because I ski in different conditions, at different places, and at very different times of the year. Also, I somehow still think that a narrower ski edges easier than 105mm+ boards, and that anything under that can be still fun in deep powder. I was right and wrong, sort of.
Here are my impressions. All from backcountry skiing.

What I really like about Dynafit’s ski-skin combo is the complete package. The skins fit exactly as they should and it’s very easy to rip them off without taking your skis off, and not from the back but from the front, like when rando racing.
Plus I have never had such a fast pair of skins out of the box, no matter what width! Usually, skins need to wear out a bit before they start gliding well. These grip uphill nicely too.

To be honest, these were my first skis over 90mm. Little late to the game…
I believe I chose the width, length and weight well for my needs. I am totally satisfied how they perform in all conditions and over various terrain.
Yes, there were some days when I thought: “Could use something wider right now”. However, those were “too deep to ski” days at couple of the best powder places in North America. Manaslu’s rockered tip definitely helps with the float.
On spring/summer snow or in chopped powder they were good, no complaints.
On hard-pack I can’t really say yet because I am still not used to forcing such a wide ski on its edge. And I can’t compare it to anything wider since I haven’t tried on a such surface.
Bottom line: Not impressive in anything specific but versatility, great all-around skis. Looking forward to take them to more places.
Manaslu skis online at:

Simply, these are some damn good touring boots.

Ease of walking is very comparable to any skimo racing boots. The no-resistance big cuff rotation plays the biggest role here, and the light weight helps as well – 1050g at size 27,5!
I tried walking them with the removable tongue in. It’s still good compared to other touring boots but definitely walk them with the tongue in your pack – it’s super easy to take out or to slide back in once on the top.

Again, I tried skiing the TLT5s with and without the tongue. There is a definite difference – always put the tongues in. But even when I forgot them in the car they skied powder no problem, on hard-pack felt little soft.
Their stiffness comes not only from the tongue but actually from the carbon cuff, so let’s talk about that.

I was fortunate to try the TLT 5 Mountain few times before I got the Performance. The Performance version is quite stiffer thanks to its carbon cuff but the Mountain version skis well too, just feels softer under pressure.
I found both boots to walk exactly the same.
One warning, the beefier liner that came with the Mountain TLT5s was much more comfortable, and I don’t have a wide or big volume foot. For this year, I am sacrificing some grams – I am buying the bigger liner and sliding it into the Performance boots. Happy feet make powder deep J
Bottom line: Just to repeat – these are some damn good touring boots.
TLT5 Performance boots online at: 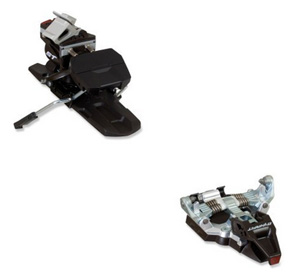 I’ve been using Dynafit style bindings for about 15 years now and I chose the Radical because I wanted to try a binding where I don’t have to bend down to twist the heel.
Stepping into these with the TLT5s could be done with closed eyes – it’s super easy thanks to a new Dynafit patent. Everything else works great as well, breaks too.
One thing that might happen sooner or later though might be that the heel lifter will snap. It’s not going to under normal use but from time-to-time when I need to stomp on the heel really hard (to set a steeper track in powder or kick off some snow) I wonder.
Crampons attach and work great too.
With Radicals, I like the fact that this binding is still lighter (at 531g), with all the ease-of-use perks, than its overbuilt competitors.
Bottom line: Great binding for anyone seeking more comfort and that is not overly rough with their gear (applies only to the heel lifter).
TLT Radical bindings online at: